TEHRAN (Defapress) - Chinese and Pakistani foreign ministers called on all Afghan stakeholders to agree on a comprehensive ceasefire and work together to achieve a broad-based, inclusive and negotiated political settlement.
News ID: 83622 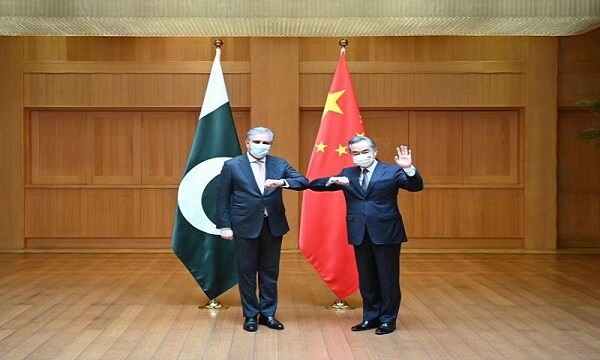 The call was made by the two sides as Foreign Minister Shah Mahmood Qureshi and his Chinese counterpart Wang Yi held the third session of the foreign ministers’ strategic dialogue in the Chinese city of Chengdu, according to the Pakistani Dawn newspaper website.

According to a joint statement issued later, the two sides reaffirmed their commitment to facilitate and support an “Afghan-led and Afghan-owned” peace and reconciliation process for the early realization of a peaceful, stable, united and prosperous Afghan­istan, which would firmly combat terrorism and live in harmony with its neighbors.

Both sides condemned the terrorist attack in the Pakistani region of Dasu which caused loss of precious lives and injuries to Pakistani and Chinese workers. Both sides expressed their resolve to expose the culprits and their reprehensible designs through the ongoing joint investigation, give exemplary punishment to the perpetrators, ensure comprehensive safety and security of the Chinese projects, nationals and institutions, and prevent recurrence of such incidents.

The deadly attack, carried out on July 15, on a coach carrying Chinese engineers to an under-construction tunnel site at the 4300 MW Dasu Hydro-power project site in Upper Kohistan in Khyber Pakhtunkhwa province has left 9 Chinese and 4 Pakistanis.