Armenia, Azerbaijan accuse each other of breaking ceasefire

TEHRAN (Defapress) - As the tensions between the Republic of Azerbaijan and Armenia escalates, the Azeri Ministry of Defense announced the mortar attack of the Yerevan Army on its positions in Nakhchivan.
News ID: 83647 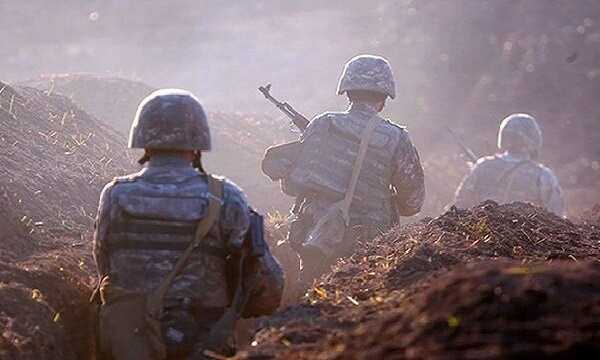 The Azerbaijani defense ministry said in a statement that at approximately 03:45 (local time) on 1 August, Armenian Armed Forces fired from their positions near the village of "Arazdin" in the "Vedi" region at the positions of the Army of the Republic of Azerbaijan in the village of Hyderabad located at the Sadarak region of the Nakhchivan autonomous republic.

The Ministry of Defense of the Republic of Azerbaijan reported that the mortar attacks on Azeri positions apparently did not inflict any casualties.

The statement added that the Azeri side responded to the mortar shells by directly targeting the Armenian positions and that after the retaliatory attack by Azerbaijani forces, the situation was calm in the region.

The new round of the escalation comes a week after the Ministry of Defense of Armenia reported that the Armed Forces of the Republic of Azerbaijan fired at the Armenian army positions near the village of Arazdin in the Ararat region of Armenia, and Armenia retaliated.

Meanwhile, the Armenian defense ministry has said today in a statement that Azerbaijani units opened fire from sniper rifles and small arms of various caliber at Armenian positions located in the Yeraskh area.

Armenian armed forces said that there were no casualties from the Armenian side.