TEHRAN (Defapress) - Iran’s mission to the United Nations has sent a letter to the head of the UN Security Council, warning the Israeli regime that it “should bear consequences of it possible adventurism”.
News ID: 83663 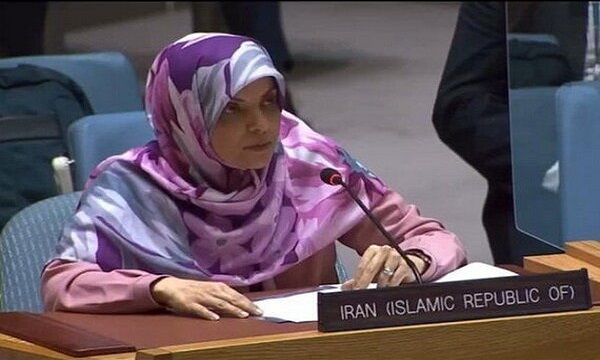 Written by Ambassador Zahra Ershadi, Chargés d’affaires ad interim of the Iranian mission, the letter came in response to a letter earlier sent to the UNSC head by representatives of UK, Romania, and Liberia which had leveled unfounded accusations against Iran.

Following is the full text of the letter as published by the Iranian mission:

I am writing to you with reference to the letter dated 3 August 2021 from the Representatives of Liberia, Romania and the United Kingdom of Great Britain and Northern Ireland to the United Nations addressed to the President of the Security Council (S/2021/701).

Without presenting any shred of evidence to substantiate their claims, the authors of the above-mentioned letter have resorted to such uncertain terms as “highly likely”, “initial assessments” and “one or more Unmanned Aerial Vehicles” as well as vague terminologies like “international partners”, to arbitrarily accuse the Islamic Republic of Iran of attacking the Mercer Street vessel. This unfounded claim – which was first raised, for obvious political purposes, by the Israeli regime immediately after the attack -- is factually wrong and politically and ethically irresponsible, and accordingly is categorically rejected.

Enjoying long coasts and numerous port facilities in the Caspian Sea, the Persian Gulf and the Oman Sea as well as high maritime shipping capacity, the Islamic Republic of Iran is highly interested in, and attaches great importance to, the maritime security and freedom of navigation. In pursuance of this objective and longstanding policy, and fully committed to its relevant international obligations, Iran has also significantly contributed to the promotion of maritime security and freedom of navigation. The deployment – for well over a decade -- of Iran’s naval forces to the Indian Ocean and the adjacent areas in support of international efforts in combatting piracy therein has repeatedly been acknowledged by the United Nations Secretary-General in his relevant reports and commended by the Security Council in its numerous resolutions.

Seizing this opportunity, I would also like to firmly reject similar and other baseless claims made by the Israeli regime (S/2021/702) as the main source of instability and insecurity in the Middle East and beyond for more than seven decades. This regime has a long dark record in attacking commercial navigation and civilian ships, one example of which is its brutal attack in international waters in the Mediterranean Sea, on 31 May 2010, against six civilian ships of the "Gaza Freedom Flotilla" -- carrying humanitarian aid to the besieged people of Gaza – and killing nine civilians and wounding many others onboard the vessels. Likewise, according to available information, in less than two years, this regime has attacked over ten commercial vessels carrying oil and humanitarian goods destined to Syria.

Recalling systematic violation of international law by the Israeli regime, including its significant threats to maritime security and freedom of navigation, as well as its long record in conducting complicated false flag operations in the high seas and key international waterways, the Security Council must remain fully vigilant about the security and military adventurism of this regime in such a volatile region as the Middle East, condemn such acts and hold it accountable for all its unlawful and yet highly destabilizing activities.

In view of the very recent provocative statements by the Israeli regime’s officials threatening to use force in gross violation of Article 2(4) of the United Nations Charter, that regime must be reminded that it shall bear the consequences of all its possible adventurism and miscalculations. Warning about such threats from any source, the Islamic Republic of Iran will not hesitate to take all necessary measures to vigorously protect its people, defend its sovereignty and secure its national interests.

We also warn about recent suspicious attempts to create artificial maritime “incidents” in the Persian Gulf and broader region. Such irresponsible acts are detrimental to the security and stability of the region and must stop immediately.

Please accept, Excellency, the assurances of my highest consideration.