TEHRAN (Defapress) - Iranian Foreign Minister Zarif called the issue of displaced people in the recent developments in Afghanistan one of the most important and necessary issues which needs serious attention, especially in the pandemic situation.
News ID: 83701 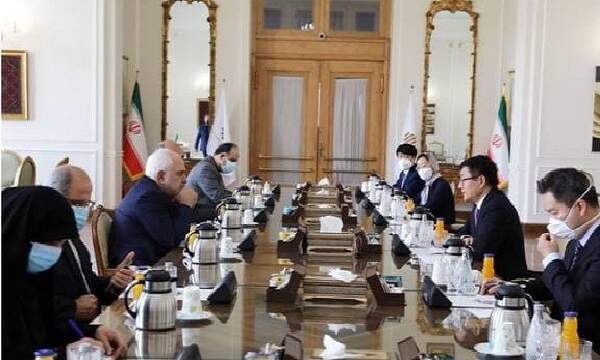 Mohammad Javad Zarif made the remarks in his meeting with the Chinese Special Envoy for Afghanistan Affairs Yue Xiaoyong on Monday.

During the meeting, the two sides discussed the latest developments in Afghanistan.

At the beginning of the meeting, Zarif congratulated the 50th anniversary of the beginning of diplomatic relations between the two countries of Iran and China and expressed his gratitude and appreciation to the Chinese government for providing the vaccine.

Elaborating the views of the Islamic Republic of Iran on recent developments in Afghanistan, the Iranian Foreign Minister emphasized his country's support for the Coordinating Council for the peaceful transfer of power in Afghanistan with the aim of preventing any escalation of violence and war in the current situation in the country.

He also explained his country's view on the developments in Afghanistan and stressed the need for cooperation between the countries of the region, especially Afghanistan's neighbors.

He also stressed that Iran is ready to continue its efforts for the spread of peace in Afghanistan.