TEHRAN (Defapress) - Addressing the Baghdad summit, the Iranian Foreign Minister Hossein Amir-Abdollahian said that security can only be achieved through mutual confidence among the countries of the region.
News ID: 83735 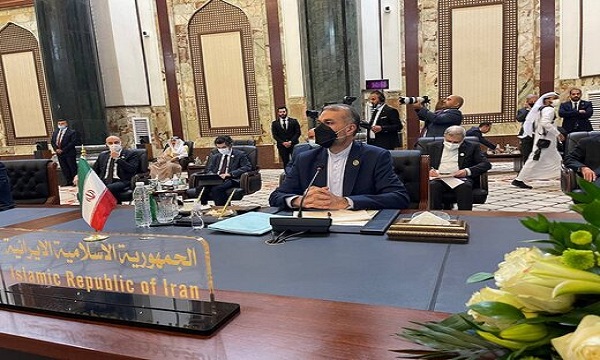 Iraq is hosting a regional conference, bringing Iraqi neighboring countries together to support Iraq ahead of early elections. Baghdad summit has kicked off with the speech by the Iraqi Prime Minister Mustafa Al-Kadhimi on Saturday afternoon.

Ankara to oppose the PKK's presence in Iraq: Çavuşoğlu

The Turkish Foreign Minister said in his address to the summit that Ankara opposes the PKK's presence in Iraq.

Çavuşoğlu said that without security, there will be no economic development, and for that, "we will not accept the presence of the PKK in Iraq."

He also said that Turkey supports stability in Iraq, adding that his country will continue to support Iraq.

He stressed that the PKK threatens the stability of Iraq.

Iraq has high capacity to recover its sources of power: Emir of Qatar

The Emir of Qatar also addressed the summit during which he said that Doha emphasizes national unity and the strengthening of Iraqi governing institutions, and considers these issues an important step for the development of Iraq.

Sheikh Tamim bin Hamad Al Thani added that Qatar is working to restore Iraq's historic role and the status it deserves and is confident that Iraq has a high capacity, including a capable workforce, to recover its sources of power.

He pointed to some crisis hotbeds in the region that threaten world security and peace without giving any more details about them.

Saudi Arabia announces its support for security, stability in Iraq

The Saudi foreign minister, for his part, pledged the support of his country to security and stability in Iraq.

“We emphasize our support for Iraq at all levels. The Arar border crossing will be an economic route between Saudi Arabia and Iraq,” Farhan Al Saud said.

Security can only be achieved via mutual confidence between regional countries: Iranian FM

Addressing the Baghdad summit, the Iranian foreign minister said that security can only be achieved through mutual confidence among the countries of the region.

"What we need more than ever today is "sustainable regional security" with the participation of the countries of the region," Hossein Amir-Abdollahian said.

The top Iranian diplomat added that the meeting, which is attended by the leaders of countries of the region, proves the efforts of the Republic of Iraq in creating areas for cooperation and interaction among regional countries.

He further expressed hope that through such meetings the region will be a prosperous, developed and free region.

Amir-Abdollahian added, “Today, Iraq is playing an important role in the region because of its constructive efforts and approach. The Islamic Republic of Iran was one of the first countries in the region to recognize the new Iraqi government and to develop its political, economic and trade relations by supporting the political processes in the country.”

“Iran has always emphasized the realization of peace through dialogue and negotiation within the region,” he added.

He noted that the fate of the government and the nations of this region are tied to shared religious, cultural, traditional, historical and geographical interests.

Elsewhere, he expressed frustration over the non-presence of Syria at the summit.

At the end, he hailed Iraq for decisions regarding its internal security, including the decision to expel foreign troops.

He also said the Islamic Republic supports the upcoming early elections in Iraq.

Iraq's security is part of all countries participating in summit: Jordan

King Abdullah said that the summit shows the pivotal role of Iraq while adding that the door of the country must be kept open for economic development.

Egypt to oppose any aggression on Iraq: Al-Sisi

The Egyptian president Al-Sisi also said in the meeting that his country opposes any aggression on Iraq.

He added that the Baghdad Summit is an opportunity to work together to meet the challenges.

He said that if there is no stability in Iraq, the other countries will not be stable. He added Kuwait will support security in Iraq.

Purpose of holding Baghdad Summit is to strengthen sovereignty of Iraq: Macron

Addressing the event, the French president said that the main purpose of holding this Summit is to strengthen the sovereignty of Iraq.

Macron hailed Iraqis for bravely fighting the ISIL and said that the upcoming elections will open a new chapter in Iraq.

He added that the European Union will send observers to the October elections.

Meanwhile, Macron said that France has various projects in Iraq.

Iraq opposes its territory be used to threaten other countries: Al-Kadhimi

The summit started in Baghdad with a speech by the Iraqi premier during which he said that his country opposes its territory be used to threaten other countries.

Mustafa Al-Kadhimi said that hosting such a summit reflects that Baghdad seeks to establish better relations with the world.

Noting that Iraq won against the ISIL terror group, the Iraqi prime minister said that the international community was serious about investing in his country.

Baghdad summit kicks off with regional leaders in attendance

The summit which started today will continue until tomorrow with the participation of delegations and leaders from Iran, Saudi Arabia, UAE, Qatar, Jordan, Turkey and Egypt, etc.

Representatives from France, the United States, Russia and Japan have also been invited to the summit while Syria was not invited.

Among the leaders, Egyptian President Abdel Fattah al-Sisi and Jordan's King Abdullah II are attending the summit, while Iran and Saudi Arabia have sent delegations with their foreign ministers at the head.

The French President Emmanuel Macron is also attending the event.