TEHRAN (Defapress) - Stating that the down-slope of the Israeli regime has started since 1982 when the Resistance forced it to withdraw to the ‘blue line’, Nasrallah urged Israelis to leave Palestine.
News ID: 83840 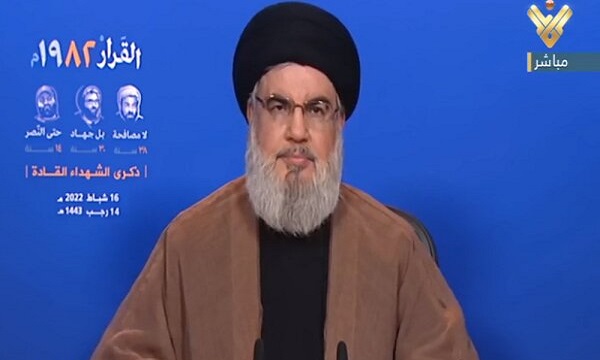 Sheikh Ragheb Harb was assassinated by an Israeli agent on February 16, 1984. Late Hezbollah Secretary General Sayyed Abbas al-Moussawi was martyred, along with his wife and son, when an Israeli airstrike attacked his convoy as he was attending the commemoration anniversary of Sheikh Harb on February 16, 1992.

"Our Resistance leaders marked our beginning and our pathway of Jihad and of deterrence equations’ shifting," he noted.

The Hezbollah chief went on to say, "The Resistance will keep the pledge despite all conspiracies and pressures. The Resistance factions in the region, including Hezbollah, believe that the Zionist entity is a fugitive entity that’s falling back."

"The down-slope of ‘Israel’ has started since 1982 when the Resistance forced it to withdraw to the ‘blue line’. High-ranking Israeli commanders and analysts confirm that ‘Israel’ is on a slippery slope and that its elimination is a matter of time," he added.

"We encourage Israelis to leave Palestine, and we’re ready to bear the cost of their tickets," the Hezbollah Secretary-General said.

"The Palestinian people shall remain steadfast as the liberation horizon looms through the Resistance path," he added.

Nasrallah also pointed to Syria, saying, "The enemy tries throughout its aggression in Syria preventing the reach of precision weapons to the Resistance in Lebanon."

"We became able to convert the thousands of missiles we have into precision missiles," he added.

The Hezbollah chief also addressed the Israelis casting about Hezbollah's precision missiles, saying, "Search as much as you wish, we are waiting."

"We began manufacturing drones in Lebanon in years, whoever wants to buy is welcomed," he added. "Our youth are able to keep pace with all advancement, we are ready for all developments in the military industry."

"The Resistance decided on activating its air defense in the face Israeli drones threat," the Secretary-General of Hezbollah noted. "Resistance capabilities and structure are constantly evolving, last summer was one of the biggest drilling seasons."