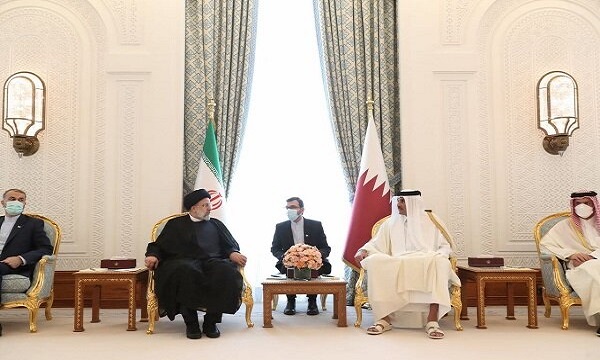 The 14 signed cooperation documents are in the fields of aviation, trade, shipping, radio and television, visa cancellation, electricity, standards, culture and education.

After the meeting and signing the cooperation documents, the Qatari Emir and the Iranian president attended a joint press conference.

"We seek change in regional relations towards interaction, cooperation and integration, Raeisi said during the joint press conference," said Raeisi.

Referring to the ongoing Vienna talks, the Iranian president said that the United States must prove its willingness to lift the anti-Iran sanctions.

He also said, “Today we have expanded our cooperation in the fields of economy, energy, infrastructure, culture and food security.”

Iran has won in the battles against terrorism and Maximum Pressure Campaign waged by the former US president, the president also noted.

Iran's capability to successfully fight terrorism brings security to the world, he said, adding that Iran extends its hand of friendship to the countries in the region for maximum interaction.

The president also said that Afghanistan's neighbors and all groups must help the country to form an inclusive national government.

Raeisi also called for the lifting of the blockade on the oppressed Yemeni people, stressing that the only solution to the Yemeni crisis is intra-Yemeni talks.

Emir of Qatar, for his part, said that the agreements signed with Iran increase cooperation between Iran and Qatar, attaching great importance to the role of joint committees in enhancing bilateral ties.

The Emir also further stressed the need for cessation of the Israeli regime’s aggression on the Palestinians, emphasizing that the Palestinians have the right to self-determination.

On the ongoing Vienna talks, Al-Thani said that his country hopes that an agreement will be concluded that will meet the demands of all parties and guarantee the rights of all countries to peaceful use of nuclear energy.

The Emir of Qatar gave his country's national football kit to Raeisi after congratulating Iran on qualifying for the 2022 world cup in Qatar as the first Asian country.

The president will also attend a meeting with Iranians living in Qatar this evening, as well as with Qatari and Iranian businessmen, and the two countries' high-level delegations will discuss the most important bilateral issues.

Raeisi and his accompanying delegation arrived in Doha on Monday morning to meet with high-ranking Qatari officials and attend the 6th Summit Meeting of the Gas Exporting Countries Forum (GECF) in Doha.