TEHRAN (Defapress) - The Russian military fighter jets could be seen flying over the capital of Ukraine hours after Moscow launched a military operation in the country.
News ID: 83877 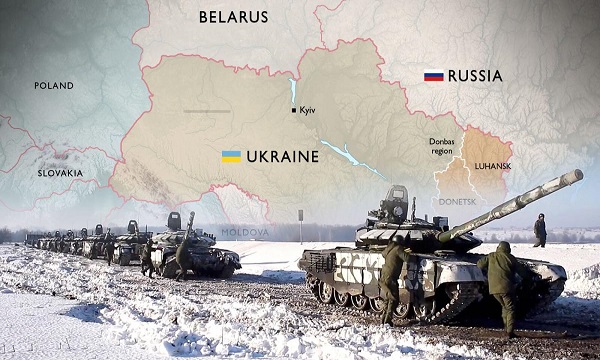 The operation’s ultimate goal is “to protect the people who have been subjected for 8 years to genocide by the Kiev regime,” Putin said in an address on Thursday morning, according to Russia Today.

Putin added that Moscow would “embark on a demilitarization and denazification of Ukraine, and handing over to justice those who committed numerous atrocities against civilians.”

The Russian president noted, however, that Moscow harbors no far-reaching plans to take over the whole territory of Ukraine.

Ukraine has been accusing Russia of illegally occupying Crimea, which was reabsorbed by Russia following a referendum in March 2014, following the US-backed coup that overthrew the elected government in Kiev.

Kiev has also repeatedly accused Russia of having a military presence in Donbass, although Moscow consistently denied this claim.

Head of Ukraine Foreign Ministry calls for Russia to be disconnected from SWIFT, RT has eported.

Global stocks and US bond yields dived on Thursday, while the dollar, gold and oil prices rocketed higher as Russian forces fired missiles at several Ukrainian cities and landed troops on its south coast, Reuters reported.

Russian Ministry of Defense: Ukraine air defense has been suppressed:

According to RT, Russia’s MoD said the Ukrainian border forces have not offered any resistance to Russian units.

The MoD also denied claims in foreign media of a Russian plane allegedly being shot down – stating the information does not correspond to reality.

Latvia, Lithuania, Poland and Estonia have all signaled intentions to invoke Article 4, which means urgent consultations on military plans for the alliance “whenever, in the opinion of any of them, the territorial integrity, political independence or security of any of the Parties is threatened."

Russian media have cited the Financial Times as reporting that EU leaders are set to discuss new sanctions on Russia at their summit meeting Thursday which will have “massive and severe consequences”, according to EU and EC leaders Ursula von der Leyen and Charles Michel.

The United States and its allies will impose "severe sanctions" on Russia after its military forces launched an attack on Ukraine, US President Joe Biden said after blasts were heard in the Ukrainian capital of Kyiv and other cities, Reuters reported.

The Russian media have claimed that Ukrainian Armed Forces troops are leaving advanced positions throughout the contact line en masse.

The Luhansk People’s Republic says Ukrainian soldiers on the line of contact in Donbas are en masse refusing to obey orders and are abandoning their positions, Sputnik has reported.

The communication revealed that intelligence data shows AFU units & troops are leaving their positions en masse, while Ukrainian cities and positions of those that have laid down their weapons are not subject to strikes.

Alexander Lukashenko, the president of Belarus has claimed that his country's army is not part of the Russian operation in Ukraine, the AFP has reported.

According to Sputnik, the Belarusian President said that Kiev should make concessions to Moscow's demands and is proposing to hold Russia-Ukraine talks in Minsk.

It as been reported that President Zelensky has announced the cutting off ties with Moscow.

China FM spox accuses US of ‘inciting war’ in Ukraine

The FM spox accused Western media of using the word “invasion” but did not when US military decided to initiate ‘armed actions in Afghanistan and Iraq.’

She continued to lambast Washington for its role – condemning America for ‘hyping up tensions and inciting war, while selling over $1.5BN worth of weapons.’

Ukrainian President Volodymyr Zelensky has reportedly called for the mobilization of civilian Ukrainians against Russian attack.

Russia has moved into Ukraine, and Zelenskyj is asking his countrymen to fight back in defense of their fatherland, Norway today cited him as saying.

“The Commander-in-Chief of the Armed Forces of Ukraine has ordered maximum casualties to be inflicted on the attacking party,” Major General Valery Zaluzhny said.

UK Prime Minister Boris Johnson is “calling for an urgent meeting of all NATO leaders as soon as possible,” in connection with the situation in Ukraine, media have reported.

The latest surge comes a day after Germany suspended its certification of the Nord Stream 2 pipeline, putting the energy project with Russia on hold indefinitely.

A reported airstrike on a facility on the outskirts of Kiev – purported to be the HQ of Ukraine’s military special ops – has been confirmed by the country’s Ministry of Internal Affairs.

Russia's special military operation aims to demilitarize Ukraine, as this poses a threat to the Russian people, the Kremlin says. However, Moscow does not exclude the possibility of negotiations with Kiev.

The timing of the Russian operation will depend on its effectiveness, according to Kremlin spokesman Dmitry Peskov, who said that Russia’s “ideal” goal is to “liberate Ukraine, clear it of Nazis.” If Kiev is ready to address Moscow’s security concerns, talks could be held between Russian President Vladimir Putin and his Ukrainian counterpart Volodymyr Zelenskyy, Peskov said.

“Throughout this crisis, NATO, the Allies, and our partners have made every effort to pursue diplomacy and dialogue with Russia, including at the highest levels,” Jens Stoltenberg confirmed in a press conference after the statement was released.

“We are deploying additional defensive land and air forces to the eastern part of the Alliance, as well as additional maritime assets. We have increased the readiness of our forces to respond to all contingencies.”

The Foreign Ministers of Russia and China, Sergey Lavrov and Wang Yi, have expressed a common opinion that the cause of the crisis around Ukraine is Kiev's rejection of the Minsk agreements, which was encouraged by the US and its allies, the Russian Foreign Ministry says.

The Russian aircraft were brought down over the eastern Luhansk region, Kiev said, according to Indepenedent.

Russia denied any of its aircraft were hit.

Champions League Final not to be held in St. Petersburg

UEFA have decided to remove the Champions League Final from St. Petersburg due to the situation in Ukraine.

When asked if President Putin had revealed his military plans in Ukraine when visiting Beijing a few weeks ago, Chinese Foreign Ministry spox Hua Chunying replied that the Kremlin makes its own decisions.

“Russia is an independent big country. It autonomously decides and implements its own diplomacy and strategy according to its own judgment and interests. Before doing anything, I am afraid that Russia does not need to seek the consent of the Chinese side."

Russian forces are trying to penetrate into Ukraine’s Kyiv region and its Zhytomyr region on the Belarusian border, Ukrainian border officials say, according to Al-Jazeera.

Russian assets plummeted approximately $259bn as stocks lost as much as 45%, marking their biggest ever retreat, while the ruble dropped to record lows to the US dollar and insuring Russian debt spiked to highest levels since 2009, Bloomberg reported.

Russian military has disabled 74 ground objects of the Ukrainian military infrastructure as a result of the strikes, the Russian Defence Ministry said.

US President Biden has convened a meeting of the National Security Council to discuss developments in Ukraine, CNN reported.

In about 15 minutes, he will hold an online call with G7 leaders and later deliver an address to the American people.

NATO will convene a meeting of its 30 leaders on Friday to weigh its next steps after Russia began attack on Ukraine, diplomats said.

It was not immediately clear who would be present and who would join virtually. Many EU leaders will already be in Brussels for a European Union summit but that will not include NATO allies United States, Canada and Turkey.

Ukraine's military said on Thursday it had destroyed four Russian tanks on a road near the eastern city of Kharkiv, killed 50 troops near a town in Luhansk region and downed a sixth Russian aircraft, also in the country's east, Reuters reported.

Russian military action against its neighbor is “unacceptable,” the Turkish president said.

Turkey’s President Recep Erdogan condemned Russia for its attack against Ukraine on Thursday. Ankara considers both Moscow and Kiev friends and “feels true regret” over their military conflict, the Turkish leader said as quoted by the Anadolu news agency. Russia’s operation “violates international law and poses a threat to regional stability,” according to Erdogan.

Zelensky ‘does not know how much longer Ukraine will exist’: Austria

The fate of Ukraine is looking increasingly uncertain as Russia launches a series of strikes across the country, President Volodymyr Zelensky has apparently told his Austrian counterpart, warning that the Eastern European nation may not be able to withstand the offensive by Moscow’s armed forces, RT reported.

Russia should be cut off from SWIFT: Czech president

Czech President Milos Zeman criticized Moscow’s military actions in the Donbass region on Thursday, calling for Russia to be cut off from the SWIFT international payment system.

The Ukrainian president has taken to Twitter to post, “Russian occupation forces are trying to seize the Chernobyl nuclear power plant.”

Zelensky said his troops are defending the facility and he had reported the alleged attack to the Swedish PM. “This is a declaration of war against the whole of Europe,” the president added, according to RT.