Iran navy to open maritime security center in near future

TEHRAN (Defapress) - Commander of the Iranian Navy Rear Admiral Shahram Irani said the navy will open a maritime security center in the near future.
News ID: 84065 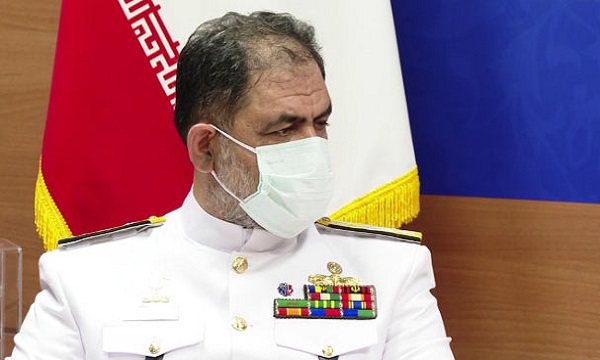 Speaking during an interview with Iranian national radio, Rear Admiral Shahram Irani said that the Persian Gulf region is controlled by the IRGC naval forces while the Iranian Army navy is in charge of the security of waters in the Sea of Oman and the north of the Indian Ocean region.

The Navy Commander stated that the Navy's strategy is to monitor and fully assess all those entering the Sea of Oman through the Strait of Hormuz, adding that "In this area, if we encounter a suspicious case, we will definitely deal with it."

Referring to the two types of naval and defense diplomacy in the Iranian army, Rear Admiral Irani stressed that "our focus is on establishing maritime relations with friendly and brotherly countries so that we can handle the bilateral and multilateral agreements, especially in the field of the sea."

He said that the presence of unjustified countries whose presence is divisive and trouble-making must be diminished, adding that it is hoped that the maritime security from the Persian Gulf to the north of the Indian Ocean will be established through the cooperation and support of the countries in the region.

The Commander of the Iranian Navy pointed out that "We will establish a maritime security center and will officially open it soon with the participation of foreign guests."

"We will establish direct contact with security centers in the Sea of Oman and the Indian Ocean and monitor all activities at the sea," Rear Admiral Irani concluded.