TEHRAN (Defapress) - Commander-in-chief of Iran’s Islamic Revolutionary Guards Corps (IRGC) stressed that enemies of the country fear to even dream of conducting any attacks against it due to the capabilities of the Iranian Army.
News ID: 84066 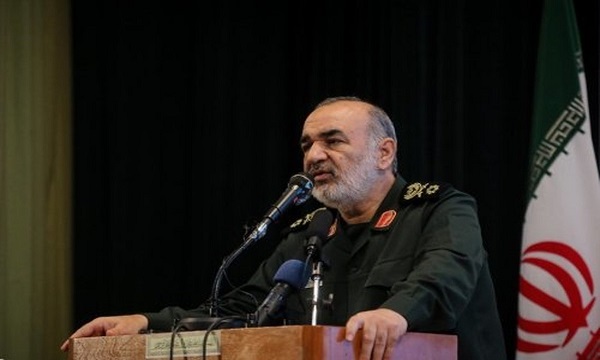 Major General Hossein Salami made the remarks on Monday in a statement addressed to the Army Chief Commander Major General Abdolrahim Mousavi on the occasion of the country’s Army Day (April 18).

“There is no doubt that the enemies’ front, particularly the Zionist regime and the United States and its wicked regional and extra-regional allies, do not dare think or even dream of making any attacks against the Islamic Iran due to its Army’s advanced and deterrent strength,” said the IRGC commander.

He added that the Army’s power was the result of a long history of sacrifices made during the past 44 years to protect the country’s independence, territorial integrity and national interest, especially during the eight years of the Sacred Defense (a name to refer, in Iran, to Iraq’s eight years of imposed war under Saddam Hussein’s Ba’ath regime from 1980-1988).

According to General Salami, the great braveries made by the Iranian Army forces during the Iraqi imposed war have been demonstrated in form of the Army’s initiatives, technological and advanced defensive and military capabilities as well as its smart deterrence against any threats.

He further appreciated the existing unity and convergence between forces of the Iranian Army and IRGC which have led to the desperation of the enemies of the county.

Iran’s Army displays its latest developments and new technologies during annual parades held in major cities, including the capital Tehran, on April 18  in the presence of senior military and executive officials.

Addressing the Army Day ceremony earlier on Monday, President Ebrahim Raeisi warned the Zionist regime about the power and authority of the country's armed forces, saying that the armed forces will target 'center' of Israel if it acts against Iran.

He added that enemies’ slightest movement is not hidden from Iran's armed forces.

“Today, our military capabilities are well-known not only in the region but also in the world,” the president said.