Expansion of Tehran-Ashgabat ties in interest of two states

TEHRAN (Defapress) - Leader of the Islamic Revolution Ayatollah Seyyed Ali Khamenei considered the expansion and deepening of relations between Iran and Turkmenistan in the best interest of both countries.
News ID: 84245 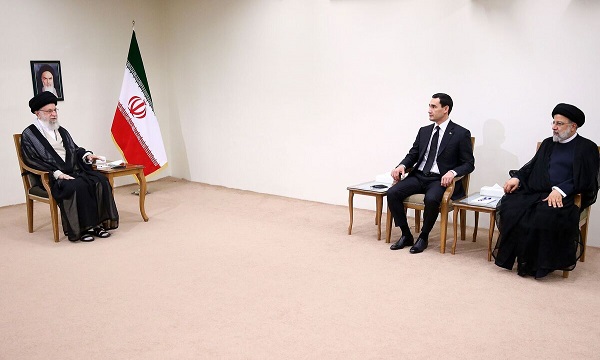 "The policy of the Islamic Republic of Iran is to expand relations with neighboring countries," said Ayatollah Khamenei in a meeting with President of Turkmenistan Serdar Berdimuhamedow on Wednesday.

Emphasizing that the need to cross the obstacles depends on the serious determination of the two countries to expand relations, the Leader added, "Of course, there are some regional and international opponents to the friendly relations between Iran and Turkmenistan but obstacles must be overcome."

Ayatollah Khamenei went on to say, "The Joint Cooperation Commission between the two countries should be seriously active and the agreements should be finalized with continuous follow-up."

During the meeting, which was also attended by the President of Iran Ebrahim Raeisi, Turkmen President Berdimuhamedow said, "The Turkmen government's priority is to expand relations with its neighbors. According to the cooperation documents signed today, we are trying to further strengthen the good relations between the two countries in various fields, especially gas, electricity and freight, as well as the implementation of major projects."

Nine MoUs and a joint statement were inked between Iran and Turkmenistan in the presence of the presidents of the two countries.

This is Berdimuhamedow’s first visit to Iran since assuming power as president of the Republic of Turkmenistan.