TEHRAN (Defapress) - The Iranian parliament speaker has told the visiting Turkmen president that Iran and the neighboring Turkmenistan have opened a new chapter in their bilateral relations with the visit of the Turkmenistan delegation to Iran.
News ID: 84247 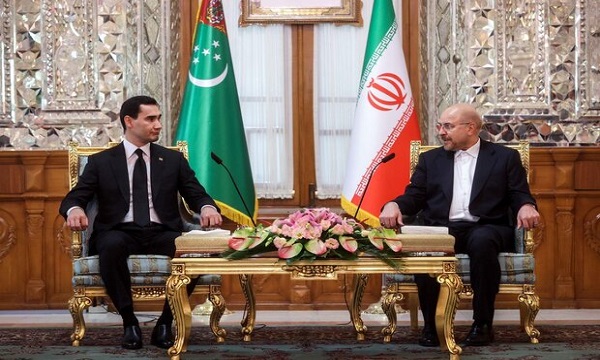 During the meeting, the Iranian speaker pointed out that the new administration in Iran has focused its foreign policy on relations with neighboring countries, adding that the Turkmenistan president's trip to Tehran will open a new chapter in the two countries' bilateral relations.

Ghalibaf called for the stepped up bilateral relations by implementing the exisiting bilateral agreements.

He also stressed the importance of creating security in Afghanistan, which shares borders with both Iran and Turkmenistan, and called for tackling issues such as the presence of terrorist groups and the issue of illicit drugs in that country as two of the most important issues that require serious cooperation between neighboring countries and Afghanistan.

Ghalibaf also stressed the need for formation of an inclusive government in Afghanistan with the participation of all Afghan groups as a solution to the problems.

The President of Turkmenistan, for his part, described relations with neighbors, especially Iran, as one of the priorities of the Republic of Turkmenistan.

The two sides also stressed the need for closer parliamentary relations between the two nations.