Terrorists may break into Parliament in less than 5 minutes

TEHRAN (defapress) – The UK police have reportedly conducted an experiment and discovered that terrorists were able to find way into the parliament in less than 5 minutes.
News ID: 65746 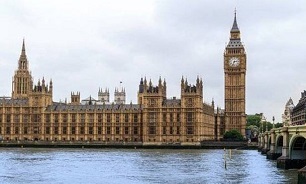 The UK police found out during a secret experiment that terrorists might gain access to the country's parliament in under five minutes and kill about 100 lawmakers, according to media reports.

Police officers posing as terrorists used a boat and stormed into the House of Commons chamber in the middle of the night, The Telegraph newspaper reported on Saturday, citing sources familiar with this test run.

The experiment had reportedly been conducted during the recess and most lawmakers had not been aware of it.

The police have been able to come up with several recommendations on bolstering parliament's security, including special barriers on the river that would prevent boats from coming near the building. An armed guard has been placed to protect the entrances from the river.

The United Kingdom has faced a number of terror attacks in 2017, such as the attack on Westminster Bridge and the Parliament grounds in London in March, and a bombing during a concert in Manchester in May.