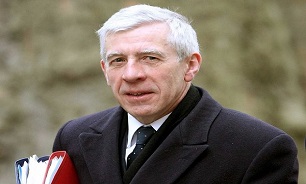 The former British diplomat made the remarks on Saturday at a summit in London where politicians and academics gathered to speak at the "Crisis in Saudi Arabia: War, Succession and the Future" summit, attended by around 200 people and organized by the non-profit press monitoring organization Middle East Monitor, according to Aljazeera news outlet.

Jack Straw, who has served as Britain's foreign secretary as well as home secretary, said Saudi Arabia's defense spending is the fourth highest in the world, outstripping that of its regional rival, Iran. However, he noted that the true scale of social inequality in the country was unknown because its "absolutist" rulers have prevented scrutiny.

"We have seen a very good example of that exercise of absolutist power with the detentions on November 4 of around 200 senior Saudis now incarcerated in the most luxurious prison in the world, the Ritz, and facing allegations of systematic corruption totaling $100bn, equivalent to the whole of Saudi Arabia's national debt," said Straw.

The UK’s former foreign secretary warned that Saudi Arabia poses a "threat” to stability in Lebanon unless calmer heads prevail in the kingdom.

Speaking at the conference on Saudi Arabia hosted by Middle East Monitor, Jack Straw said the policies currently being pursued by Crown Prince Mohammed bin Salman are extremely risky for the region; Straw warned against military intervention in Lebanon.

"The generation I dealt with were much more cautious,” he said, referring to his 2001-06 period in office, which was marked by the ill-fated Iraq War and allegations over extraordinary rendition of terror suspects. "They were much more cautious when it came to the social environment in Saudi Arabia. ... Saudi foreign policy could end up as a threat in Lebanon unless wiser council prevails.”

Another speech of the event was delivered by Paddy Ashdown the former leader of Britain's Liberal Democratic Party who once mediated in the Bosnian conflict.

He warned that it was crucial for countries such as UK and US not take sides in a stand-off unfolding between Saudi Arabia and Iran.

Ashdown also described the sale of British arms to Riyadh for use in the war in Yemen and the UK's "tacit support" for the Saudis as "shameful".

"It is shameful that Britain is supplying weapons and indeed tacit support to Saudi Arabia when it is clearly in breach of international law in its indiscriminate attacks on civilians in Yemen."

While more than 10,000 people have been killed and more than 40,000 injured since the outbreak of Saudi war against Yemenis’ domestic uprising toppling the Saudi-backed ruler of the Arab country, according to the United Nations, US and other western countries especially UK continue providing the kingdom with arms.

Meanwhile US Congressman Ro Khanna criticized US support of Saudi Arabia in war against Yemenis, on Saturday.

"That’s going to make a difference. That can at least save lives,” says Khanna,. "Today, I believe that we are aiding Saudi Arabia in Saudi Arabia’s committing war crimes.”

A cholera outbreak has also claimed the lives of more than 1,800 people since April, with 400,000 suspected cases across the country, according to the UN and the International Committee of the Red Cross.