TEHRAN (defapress) – Iranian Foreign Minister Mohammad Javad Zarif deplored the US administration’s move to recognize al-Quds (Jerusalem) as the capital of the Israeli regime and said the holy city will remain as an “Arabic and Islamic” entity forever.
News ID: 67293 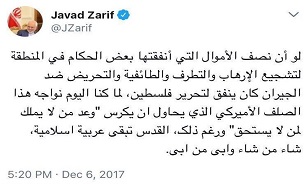 "If half of the money spent by some regional rulers to support terrorism, extremism, sectarianism, and incitement against neighbors had been spent on liberating Palestine, we would not have faced the US’ nonsense remarks and its efforts to sanctify and consolidate a promise from those who do not own to those who do not deserve (the Balfour Declaration),” Zarif said in an Arabic post on his Twitter account on Wednesday.

"However, whether they want it or not, al-Quds will remain Arabic and Islamic,” Zarif added in his tweet.

The Iranian top diplomat’s remarks came as US President Donald Trump officially declared the disputed city of al-Quds as Israel's capital, despite warnings from around the world that the measure risks triggering a fresh wave of violence in the Middle East.

In a speech at the White House earlier in the day, Trump said his administration would also begin a years-long process of moving the American embassy in Tel Aviv to the holy city.