TEHRAN (defapress) – Iranian President Hassan Rouhani underlined the necessity for enhancing Islamic unity in the world, saying that if Muslims were united, the US president would not have dared to declare Quds (Jerusalem) the capital of the Israeli regime.
News ID: 68705 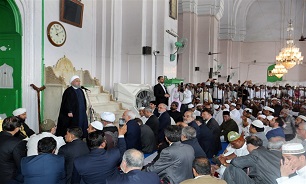 “The Islamic Republic of Iran believes that there is no other way but unity among Muslims all over the world,” the president said in an address to Friday prayers worshippers at Makkah Masjid (mosque) in the city of Hyderabad, the capital of the southern Indian province of Telangana.

“If Muslims were united, the US president would not have dared to declare Quds the capital of the usurper Zionist regime and the Israeli regime would not dare to violate the rights of the Palestinian nation,” he added, warning that the enemies of Islam do not want to see unity among Muslims.

In December, US President Donald Trump officially declared the disputed city of Quds Israel’s capital, despite warnings from around the world that the measure risks triggering a fresh wave of violence in the Middle East.

Elsewhere in his remarks at Makkah Masjid, Rouhani hailed the security and stability in India and said Iran is ready to meet the South Asian country’s oil and energy needs and cooperate with India in industrial, agricultural and technological fields to serve the interests of the two nations and the region.

The Iranian president arrived in India on Thursday on a three-day trip at the invitation of Indian Prime Minister Narendra Modi.

He is heading a political and economic delegation, including Foreign Minister Mohammad Javad Zarif and a number of representatives from the Iranian private sector.

Earlier, Rouhani and other Iranian officials held a meeting with a group of elites, clerics and leaders of the Muslim community in Hyderabad, where he warned of Western attempts to sow discord among Muslims by creating Takfiri outfits.

On Saturday, the Iranian president is to meet with Modi, Indian President Ram Nath Kovind, and Foreign Minister Sushma Swaraj, besides taking part in a joint economic gathering.

Regional and international developments as well as bilateral trade ties top the agenda of Rouhani’s talks with Indian authorities.