High-ranking Iranian and Omani military officials in a meeting in Tehran on Tuesday reiterated the need for the further development of defense ties and cooperation between the two countries.
News ID: 70077 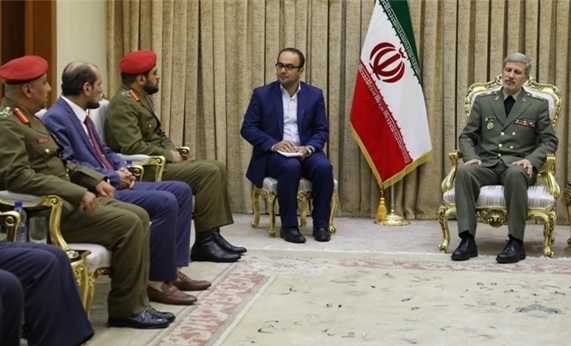 TEHRAN (Defapress)- During the meeting between Iranian Defense Minister Brigadier General Amir Hatami and General al-Balushi, the deputy commander of the Royal Army of Oman, the two officials underscored the importance of expansion of bilateral relations, specially in military and defense fields.

General Hatami, for his part, said that talks and collective cooperation among the regional states can pave the ground for peace and mutual confidence, and said, "Our message to the region is peace and friendship and we have always announced our preparedness to spread a positive and constructive atmosphere along with confidence and trust."

General al-Baloushi, for his part, described relations between Tehran and Masqat as highly strong and sustainable, and said that his country attaches much importance to the development of bilateral ties with Iran.

In a relevant development in April, Deputy Chief of the Iranian Armed Forces for International Affairs Brigadier General Qadir Nezami in a meeting with Commander of the Royal Navy of Oman Rear Admiral Abdullah al-Raisi in Tehran on Tuesday stressed the necessity for holding more joint military wargames by the two countries.

"Iran and Oman hold very important joint drills each year and we hope that these exercises continue and increase and we can even stage them in joint cooperation with other friendly and neighboring states," General Nezami said during the meeting on the sidelines of the Indian Ocean Naval Symposium (IONS) conference.

He expressed concern about insecurities and chaos in the region, emphasizing the need for further cooperation between the countries in different fields.

Rear Admiral al-Raisi, for his part, underscored that Oman's Sultan Qaboos is deeply willing to further expand ties with Iran, and added, "We are pleased that at present relations between the countries are in a very good situation."