Foreign Minister of Pakistan, Abdullah Hussain Haroon says his country desires to further strengthen cooperation with Iran in areas of mutual interest for the benefit of the two countries and to ensure peace and stability in the region, a foreign ministry statement said.
News ID: 71233 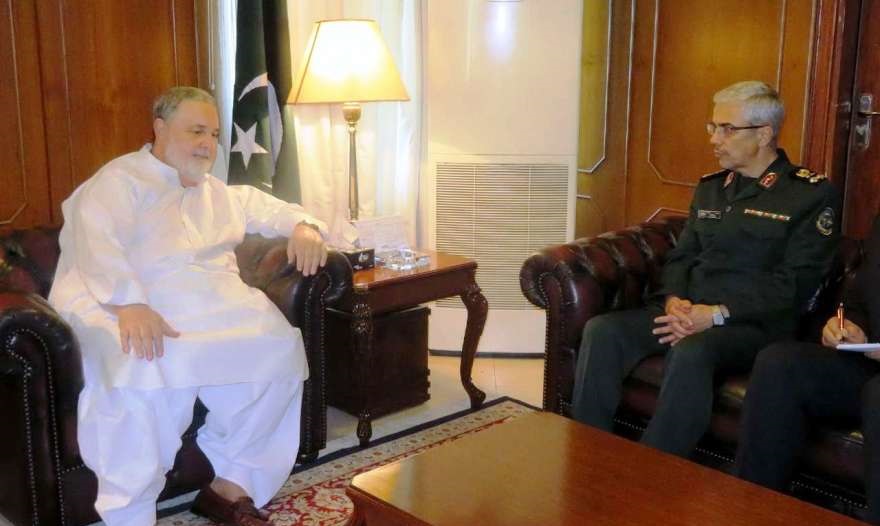 TEHRAN(Defapress)- He said this during a meeting with Iranian Chief of Staff of the Armed Forces Major General Mohammad Hossein Bagheri who called on him in Islamabad along with a high level military delegation.

The Foreign Minister stated that Pakistan and Iran have enjoyed religious and socio-cultural affinities. The bilateral relations have continued to strengthen with regular exchange of visits at various levels during the past few years.

The Foreign Minister appreciated the Iranian leadership’s strong and consistent support on the issue of Kashmir.

During the meeting, it was noted that both countries have made useful progress in areas of trade, connectivity, cultural relations and enhancing people-to-people contacts.

There was a considerable scope to enhance these relations further. The Foreign Minister also briefed Major General Mohammad Bagheri on the upcoming general elections in Pakistan, expressing the desire of the government to hold free, fair and transparent elections.

The two sides also discussed issues related to peace and stability in Afghanistan and other matters of mutual interest in the region.

General Bagheri conveyed the best wishes of the Iranian leadership and people of Iran for continued prosperity and progress of Pakistan.

He expressed the confidence that the upcoming elections would usher Pakistan to an era of continued growth under strong leadership. He also thanked Pakistan for its principled stance on JCPOA.

He had also met with President Mamnoon Hussain to discuss bilateral ties, international and regional developments.

During the meetings Maj. Gen. Bagheri expressed his opinion on war on terrorism, expansion of border cooperation, and the ways to broaden bilateral relations.

Iranian Chief of Staff of the Armed Forces heading a high-level delegation arrived in Pakistani capital, Islamabad on Sunday on a three-day official visit for talks with the country’s officials.