TEHRAN (defapress) – Iranian deputy FM Dehghani met with his Russian counterpart Sergei Vershinin on the sidelines of an anti-terror conference in Moscow, and exchanged views on ways to combat terrorism and expand bilateral cooperation.
News ID: 72196 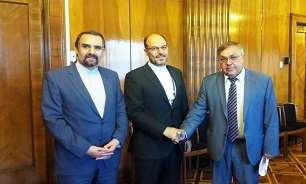 Iranian Deputy Foreign Minister for Legal and International Affairs, Gholamhossein Dehghani, met with Deputy Minister of Foreign Affairs of the Russian Federation, Sergei Vershinin, on Tuesday before wrapping up a two-day visit to Moscow aimed at taking part in an anti-terror conference.

During the meeting also attended by Iranian Ambassador to Russia Mehdi Sanaei, the two sides condemned unilateralism and stressed the necessity of observing accepted international rules and promoting multilateralism.

They also called on all UN Member States to take a stance against unilateral sanctions as one of the requirements of today’s era for maintaining and promoting global security.

The Russian and Iranian top diplomats also highlighted the need for finding a political solution to end regional crises, and stressed the prominent role of the United Nations and other international communities in this regard.

Dehghani and Vershinin further deemed transparency and compliance with international law by other sides to be necessary for resolving conflicts in the world.