Pompeo Should Be Sorry for US Behavior Not ICJ Ruling

TEHRAN (defapress) – Iranian Foreign Ministry Spokesman Bahram Qassemi slammed US Secretary of State Mike Pompeo’s remarks against a ruling by the International Court of Justice (ICJ) in favor of the Islamic Republic, saying that he should be sorry for his country’s “unwise behavior” not the verdict.
News ID: 72862 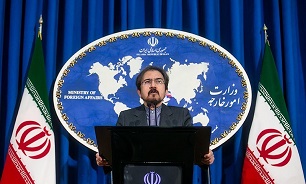 In remarks released late on Wednesday night, Qassemi responded to Pompeo, who earlier in the day announced the US withdrawal from a 63-year-old friendship treaty with Iran.

“Mr. Pompeo would be well-advised to be sorry for the US administration’s unwise behavior instead of expressing sorrow over the ICJ’s verdict,” he noted.

Pompeo announced Wednesday that the US is withdrawing from the 1955 Treaty of Amity with Iran after Tehran successfully made an international complaint that Washington had violated that accord.

“We're disappointed that the court failed to recognize that it has no jurisdiction to issue any order relating to these sanctions measures with the United States, which is doing its work on Iran to protect its own essential security risks -- risk -- interests,” Pompeo said.

Judges at the ICJ, the highest United Nations court, ruled in favor of Iran in a lawsuit against the US for breaching the 1955 Treaty of Amity by re-imposing sanctions on the Islamic Republic after pulling out of the JCPOA.

In a provisional verdict on Wednesday, the ICJ ruled that the US government should lift all bans on the free export of humanitarian goods like food and medicine to Iran which have been re-imposed after Washington’s withdrawal from the 2015 Iran nuclear deal.

The ICJ, which is based in The Hague and is also known as the World Court, is the United Nations tribunal for resolving international disputes. Iran's filing asks the ICJ to order the United States to provisionally lift its sanctions ahead of more detailed arguments.