TEHRAN (defapress) – The Iranian Army, the Islamic Revolution Guards Corps (IRGC) and the Basij voluntary forces have taken a big role in the rescue and relief efforts across the areas hit by floods in the wake of heavy rainfall over the past days.
News ID: 76551 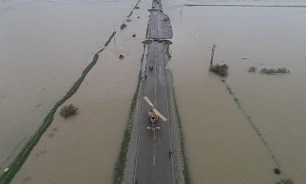 Record spring rainfall that has battered Iran in recent days has caused serious flooding in many areas, mainly the provinces of Golestan, Lorestan, Khuzestan, Fars and Ilam, forcing thousands to leave their homes.

While residents in vast areas of Lorestan inundated by flood are in dire need of relief aid, the Army Ground Force, the IRGC, and Basij have deployed forces, heavy military machinery, aircraft and boats to the disaster zones.

On Tuesday, the Navy airlifted a super-heavy dredger machine from the southwestern city of Khorramshahr to the country’s northern areas where the residential areas are still filled with flood water.

Elsewhere in Khorram Abad, the capital of Lorestan Province, the IRGC troops helped reopen the city’s airport which had been shut due to flooding.

In the meantime, IRGC Spokesperson General Ramezan Sharif said the IRGC Aerospace Force have flown drones over the flood-hit areas to collect data for evaluating the situation and managing the crisis.

Also on Tuesday, Army Ground Force Commander Brigadier General Kiomars Heidari said his forces in the Airborne Division have evacuated people on board choppers from the flooded areas, and are helping the Red Crescent Society in the delivery of medical aid and foodstuff.

He also noted that the Army Ground Force’s personnel carriers and amphibious vehicles have been employed to carry people and equipment across the rivers with damaged bridges.

More than 40 people have been killed as a result of the flooding countrywide. The southern city of Shiraz, the capital of Fars province, with 19 deaths that occurred during last week’s floods accounts for the highest number of casualties.