Zarif Reminds Trump of Proscription of Nukes in Iran 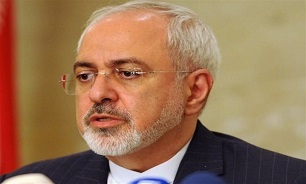 In a message on his Twitter account on Monday, Zarif responded to comments by Trump who said the US wants to ensure that Tehran will not be developing what he called nuclear weapons.

It came after Trump said at a joint press conference with Japanese Prime Minister Shinzo Abe in Tokyo on Monday that he is not pursuing regime change in Iran and his main goal is to ensure that Tehran would not gain nukes.

Senior Iranian officials, including Ayatollah Khamenei, have on many occasions stressed that production, stockpiling and use of nuclear weapons are forbidden and the Islamic Republic considers pursuing and possessing nuclear weapons as a grave sin.

The Iranian top diplomat also once again lashed out at the “B-Team”, a group of four anti-Iran hawks, saying, “B-Team's #EconomicTerrorism is hurting the Iranian people & causing tension in the region. Actions -not words- will show whether or not that's @realDonaldTrump's intent.”

Trump said in Japan that Iran “has a chance to be a great country with the same leadership.”

“We are not looking for regime change” in Iran, the US president added.

Trump also told reporters that he and the Japanese leader had talked about Iran, saying, “Nobody wants to see terrible things happen, especially me.”

“I do believe Iran would like to talk and if they’d like to talk, we’ll talk also,” Trump stated, adding that Abe has a “very good relationship with Iran.”

Japanese media reported that Prime Minister Abe is considering a visit to Iran next month. Earlier reports said that Abe’s visit would be likely in mid-June. Earlier this month, Zarif visited Tokyo.