TEHRAN (defapress) – Iranian Foreign Minister Mohammad Javad Zarif and Iraqi Parliament Deputy Speaker Khalil al-Haddad, who is visiting the Islamic Republic at the head of a parliamentary delegation, exchanged views about a range of issues, including ways to boost bilateral ties.
News ID: 77813 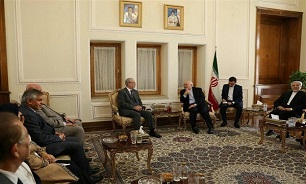 During the meeting, held in Tehran on Tuesday evening, the two sides discussed the deep-rooted relations between Iran and Iraq as well as the important agreements reached in various areas, economy in particular.

They also talked about facilities provided for the Iranian and Iraqi people for reciprocal visits and the two countries’ role in boosting regional stability and security.

Iran and Iraq enjoy cordial political, security and cultural ties but due to some internal and regional problems including Daesh (also known as ISIS or ISIL) terrorism in Iraq, they have not been able to increase their trade volume.