TEHRAN (defapress) – The possibility for US President Donald Trump to develop relations with Russia is limited by the US political system, although a lot depends on his political will, Russian President Vladimir Putin said in an interview.
News ID: 77848 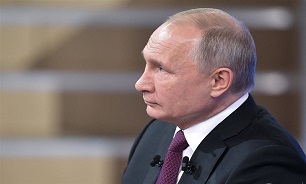 "We see that the system is so that many things, which he (Trump) wants to do, cannot be done. Although, certainly, a lot depends on the political will," Putin said in the interview with NTV host Irada Zeinalova published on the TV channel’s website.

The Russian leader noted that both Russia and the United States are interested in dialogue. Attempts to achieve goals by force won’t be crowned with success, he added. "I don’t think that someone is trying to push us into something. It seems that everyone understands that this is unlikely."

"But of course, dialogue is needed," the Russian president said. "They have their own idea of how these or other issues are solved, and we have our own. But it is impossible to find consensus without dialogue," Putin said. "Therefore, as soon as they are ready - please, we will be glad to develop these relations," he added, Tass reported.