TEHRAN (defapress) – Caretaker of Iran’s Permanent Mission to the United Nations, Es'hagh Al Habib dismissed the US’ attempts to buy the Palestinians' "honor, aspirations and dignity by money", saying that ending the occupation is the only solution to the crisis in Occupied Territories of Palestine.
News ID: 78161 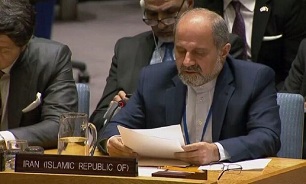 Touching upon an initiative proposed by US President Donald Trump, dubbed as the "Deal of the Century", the Iranian diplomat said, "The so-called deal of the century is based on wrong assumptions simply because it is to buy the Palestinian cause and aspirations, honor and dignity, property and territory, and inalienable rights of an entire nation."

He made the remarks addressing the United Nations Security Council meeting on “The situation in the Middle East, including the Palestinian question” on Tuesday.

The full text of his speech is as follows:

In the Name of God, the Most Compassionate, the Most Merciful

I thank you for convening this open debate and align myself with the NAM and OIC statements.

The main development since the previous open debate was the attempts to implement the so-called “deal of the century” through convening a workshop on Palestine in Bahrain.

This initiative is based on ill-intents, wrong assumptions and unrealistic approaches, and therefore is definitely doomed to fail.

It is based on ill intent simply because it has been proposed by the U.S., a country who is well-known for its biased policies rendering unconditional support for Israel as well as unjust practices towards the Palestinians.

The latest living examples include moving the US embassy to Jerusalem and recognizing Israel’s sovereignty over the Occupied Syrian Golan, both of which are in flagrant violation of the peremptory norms of international law.

Basically, during the past seven decades, the Security Council has been unable to force the Occupying Power to end the occupation because of the unreserved support of the US for Israel.

Such a systematic US support, when even Israel is committing the most heinous and barbaric crimes, has emboldened the Zionist regime to continue, with total impunity, to commit all international crimes systematically.

Relying on such supports, Israel has also continued its expansionist policies and illegitimate practices in oppressing the Palestinians in gross violation of their basic rights.

One of such brutalities is the decade-long illegal blockade of Israel on Gaza, turning it to the largest open prison in the world. This inhumane blockade must come to an end.

Moreover, the so-called “deal of the century” is based on wrong assumptions simply because it is aimed at buying all causes and aspirations, honor and dignity, property and territory, and inalienable rights of an entire nation.

It is certainly an illusion and therefore definitively will completely fail.

The cause of Palestine is based on the struggle of a nation for freedom; for liberty; for independence; for complete control over all its ancestral lands; for preserving its religious and cultural identity and sites; and for saving its honor and dignity.

Diminishing and shrinking such noble and holy causes to economic improvement is the wrongest ever possible assumption to solve the question of Palestine.

Additionally, the so-called “deal of the century” is based on an unrealistic approach, simply because all of the Palestinian groups, without exception, have strongly rejected this deal.

Furthermore, Al-Quds Al-Sharif, in addition to Palestinians, is dear to all Muslims, and no Muslim in the world is ready to accept such a disgraceful plan. Al-Quds Al-Sharif is and will remain the capital of Palestine.

History tells us that no nation has compromised on its sacred causes and the nation of Palestine is no exception.

Mere struggle and resistance of Palestinians in the course of the past seven decades clearly indicate that how resolute, determined and persevere they are in realizing their noble objectives of liberty and independence.

They suffered economically for seven decades to liberate their lands. What they need is freedom and liberation. Once the occupation ends, they well know how to improve the economy of their independent State.

At the same time, the international community should continue its strong support to the Palestinians in their struggle to liberate their homeland.

Under the pretext of economic improvement, the main aim and the true nature of the so-called “deal of the century” is to consolidate the occupation. The World must resist this unjust move.

This Council as well must end the vicious cycle of being bullied by one of its permanent members who unlawfully and brazenly continue rendering this body inactive and ineffective regarding Israel.

This hypocritical policy should come to an end and the Council must be able to play its Charter-based role in support of the Palestinians.

Ultimately, like any other crisis, the question of Palestine cannot be solved without addressing its root causes. There is no magic solution. The unlawful occupation of Palestine is the main source of this crisis and it can end only by ending the occupation.

Finally, the Israeli representative, in total disregard of this meeting’s agenda, which is respected by all and is focused on the Palestinian question, unsuccessfully tried to distract attentions away from the crimes and unlawful policies of its regime.

He must have explained why they continue the occupation of Palestine; investing on death and destruction; invading other countries; imposing inhumane blockade on Gaza; killing innocent children; demolishing homes, schools and hospitals; promoting racism; developing all types of weapons of mass destruction, including hundreds of nuclear weapons; rejecting to join treaties banning WMDs, particularly the NPT; rejecting the establishment of a nuclear-weapon-free zone in the Middle East. Stop fabrications, lawlessness, brutality and crimes and be accountable.

I thank you, Mr. President.