TEHRAN (defapress) – US President Donald Trump said he is not bothered by North Korea’s decision to fire two short-range missiles this week that rattled its Asian neighbors.
News ID: 78188 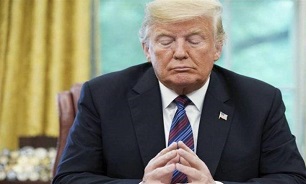 When a reporter asked him about the missile tests, Trump said Friday that “short-range” was the most important word, AP reported.

He said North Korea fired “standard” missiles many countries possess. They were the first weapons North Korea has launched in more than two months.

The missile tests come as US and North Korean officials struggle to set up nuclear weapons talks after a recent meeting on the Korean border between Kim and Trump that seemed to provide a step forward in stalled negotiations.

Trump said his relationship with Kim remains good and that the missile tests were not a warning to the United States.