most visited
world << world
In a meeting with British PM:

TEHRAN (defapress) – Iranian President Hassan Rouhani, in a meeting with UK's Prime Minister Boris Johnson, urged European signatories to the JCPOA to live up to their commitments under the deal.
News ID: 78805 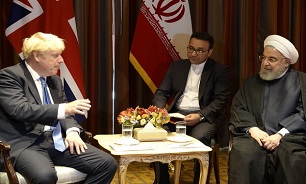 President Rouhani held talks with UK Prime Minister Boris Johnson on Tuesday on the sidelines of the UN General Assembly in New York.

Rouhani stressed that improving Iran’s economy through removing bans was one of the commitments of the signatories to the deal, urging Europe to implement its commitments, including the operation of the INSTEX trade mechanism.

Rouhani also slammed the recent E3 – France, Germany, UK – statement which accuses Iran of being behind attacks on Aramco, noting, “Issuing this baseless statement in the current critical and complicated conditions is not constructive and beneficial at all.” This is while Yemeni forces have accepted the responsibility of the attack, saying it was a response to years of Saudi invasion of their country.

Rouhani also went on to refer to Hormuz Peace Endeavor (HOPE), which will be brought about at his UNGA speech today, and described cooperation among regional countries as the only way to establish sustainable peace and stability in the region.

Prime Minister Boris Johnson, for his part, said that London is willing to develop relations with Tehran, adding that his country has always supported the JCPOA and will continue to do so.

He also said that the British foreign minister worked hard to dissuade the United States from withdrawing from the JCPOA, but to no avail.

He referred to Iran’s effective role in the region, saying, “We still hope that the JCPOA continues to be in place and regional tensions ease.”