Those blaming Iran for Aramco attacks must show their evidence 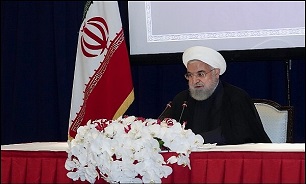 He made the remarks on Thursday in a press conference in New York while responding to a question regarding the attacks.

“Why should WE explain about Yemen and the attack on the Aramco oil facilities? What does it have to do with us?" he framed in a first reaction to the question.

"Today, there is a bloody war in the region; a fruitless war against Yemen. The Yemeni people have the right to self-defense and they have to defend themselves, and the whole world knows that the Yemeni forces and the Yemeni army have both long-range missiles and drones,” he added as quoted by Iranian President’s office.

“Those who accuse others must present their evidence; if the invasion was not from the south and from the north, east or west, those who claim must make their claim clear,” he stressed.

"I asked some European leaders who had made false accusations about their evidence, and they said they had no evidence, but they thought the Yemeni forces were less capable than carrying out such an attack. In response, I asked them whether lack of knowledge about the Yemenis’ capabilities should lead to such conclusion and accusations,” added Rouhani.

The president added, "I even told them if you have any evidence, be sure to send them to me, and I would like to see what your evidence are, so let’s come together instead of leveling accusations, and put out the flames in the region.”

"The Yemeni people and army announced a few days ago that they were ready for a complete ceasefire, and that all activities would be stopped if Saudi Arabia and the United Arab Emirates stop their attacks," he said, adding, “Unfortunately, after this announcement, we are still seeing attacks on innocent Yemeni people.”

The Sept. 14 attacks by Yemeni forces on the Abqaiq and Khurais plants, some of the kingdom’s biggest, caused raging fires and significant damage that halved the crude output of the world’s top oil exporter, by shutting down 5.7 million barrels per day of production.

The attack was in retaliation of Saudi-led coalition’s aggression against Yemen. Still, the US and Saudi officials rushed to blame Iran for the incident without providing any credible evidence. Tehran sent an official note to US warning that any aggression against its soil will be promptly responded.