TEHRAN (defapress) – United Nations refugee chief Filippo Grandi asked on Saturday for more resources for Mexico’s asylum agency, which has been overwhelmed with applicants after many abandoned plans to migrate to the United States.
News ID: 78854 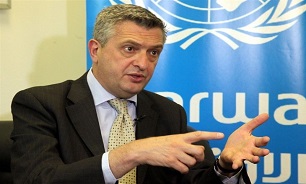 Resources at the agency, COMAR, have become more stretched since the US Supreme Court earlier this month decided to restore a Trump administration policy that requires most immigrants who want asylum to first seek safe haven in a third country that they traveled through on their way to the United States.

Grandi was visiting COMAR in Tapachula in the state of Chiapas near the Guatemalan border, where many Central American migrants cross into Mexico on their way north to the US border.

“COMAR needs more resources and room to work because the challenge is increasing,” he said at a news conferences.

“There has been an important increase but this does not equate with the resources that COMAR has. We have to speed up the relocation of at least those who receive refugee status,” Grandi said.

COMAR received federal funding of 20 million pesos ($1 million) in 2019, the lowest sum in seven years. The proposed 2020 budget would increase it to 27 million pesos.

The agency’s head, Andres Ramirez, told Reuters earlier this month that COMAR would still fall short of the 117 million pesos needed. Applications are expected to hit 80,000 this year, more than double last year’s.