TEHRAN (defapress) – Austria’s Ambassador to Tehran, Stefan Scholz said that strategic relations between Tehran and Vienna has been put into practice.
News ID: 79071 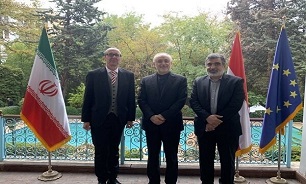 He described ties between Iran and Austria ‘strategic’.

He made the remarks late on Tue. on the occasion of National Day of Austria, held at the venue of the embassy in Tehran, and pointed to Vienna’s hosting of landmark nuclear talks between Iran and six world’s major powers and added, “Austrian government throws its weight behind Joint Comprehensive Plan of Action (JCPOA), official title of Iran’s nuclear deal, and believes that signatories of the deal should live up to their commitments fully.”

Austria lashes out at US pullout from JCPOA and reimposition of unilateral sanctions against Iran, he said, and added, “commitment of other countries involved in nuclear talks for maintaining and encouraging vast economic ties with Iran paved suitable ways for Iran and Austria to bolster bilateral ties in all arenas, the most importance of which can be referred to setting up renewable energies’ center for Economic Cooperation Organization (ECO)’s member states.”

It should be noted that commemoration ceremony of “National Day of Austria’ was held on Tue. in the presence of Vice President and Chief of Atomic Energy Organization of Iran (AEOI) Ali Akbar Salehi and AEOI Spokesman Behrouz Kamalvandi.