TEHRAN (defapress) – The secretary-general of the Lebanese resistance movement accused the United States of obstructing the implementation of fundamental reforms and materialization of sustainable development in Lebanon.
News ID: 79152 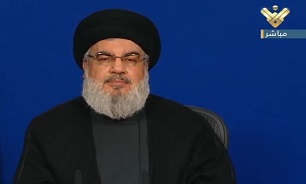 Addressing his supporters in a televised speech broadcast live from the Lebanese capital city of Beirut on Friday evening, Seyed Hassan Nasrallah said that Americans have only sought to create tensions and spark off crises there.

The Hezbollah secretary-general further underlined that the new government in Lebanon must strive to earn and retain public trust, and it must demonstrate seriousness, work strenuously and continuously, sort out priorities and stay on the path of openness and transparency for such an objective to be accomplished.

“We call for dialogue among all (Lebanese) political parties, parliamentarians, and honest protest leaders. Our country needs everyone, and everyone must shoulder his responsibility,” Nasrallah said, Press TV reported.

He highlighted that Hezbollah did not support the resignation of Sa’ad al-Hariri as prime minister, saying, “It was his choice and he had his own reasons.”

“Now that the prime minister has stepped down, the entire government is brought down. There is, therefore, no chance to implement any reform or cherish hope for the betterment of the economy. We just have to wait,” the Hezbollah chief said.

“We never asked protesters to leave the streets, we asked them to give the government the chance to enact reforms,” Nasrallah said, emphasizing that refusal not to support the resignation of the Lebanese government was merely for the sake of the country’s national interests rather than those of Hezbollah.

“We feared chaos which would prevent the cabinet from paying its employees' salaries,” Nasrallah said.

He underscored that the resistance in Lebanon is stronger than ever before and it has never been that powerful.

Nasrallah went on to say that his movement has never been in control of any government in Lebanon. “This is only an attempt to hold Hezbollah responsible for the (rampant) corruption in the country,” he commented.

The Hezbollah chief also asked media outlets to exercise maximum vigilance, and not to propagate any sectarian call or foul language in the name of people’s voice.

“Curses are never the voice of people. All such verbal abuse is an attempt to pit opposite sides against each other, and cause trouble and clashes in the country. The form and amount of the ongoing slander is unprecedented.

“Lebanese people have been able to thwart many attempts aimed at generating tensions in the country, thanks to their awareness and consciousness,” Nasrallah said.