US Says Will Leave Up to 600 Troops in Northeast Syria

TEHRAN (defapress) – As many as 600 US troops will remain in northeastern Syria, Gen. Mark A. Milley, chairman of the US Joint Chiefs of Staff, said.
News ID: 79252 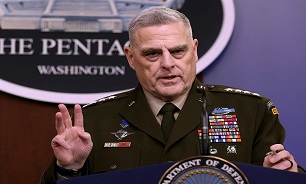 “There will be less than 1,000 for sure,” Milley said, referring to the number present when US President Donald Trump ordered their complete withdrawal last month.

Trump later was persuaded by national security advisers and congressional supporters, such as Sen. Lindsey O. Graham to retain an unspecified number of troops whose mission, the president said, was to “secure” Syria’s oil.

Milley, speaking on the ABC News program “This Week,” said the number of troops that would remain was “probably in the 500-ish frame. Maybe 600.”

He did not mention Syrian oil but said there are still Daesh militants “in the region and unless pressure is maintained . . . then there’s a very real possibility that conditions could be set for a reemergence of ISIS.”

Trump’s withdrawal announcement came after Turkey last month prepared to launch a cross-border invasion into northeastern Syria. The US administration later reached an agreement with Ankara to remove Kurdish forces — which Turkey considers terrorists — and US forces from an area 75 miles wide and about 20 miles deep along the border to avoid a clash with the Turkish force.