TEHRAN (defapress) –The president of Armenia Chamber of Commerce and Industry said that establishing the Iran-EAEU trade office in Yerevan is a serious measure for expanding trade ties between Iran and Eurasian Economic Union (EAEU).
News ID: 79395 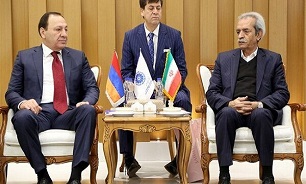 Martin Sargsyan made the remarks during a meeting with Gholam-Hossein Shafeie, the Head of Iran Chamber of Commerce, Industries, Mines and Agriculture (ICCIMA) at the place of the chamber in Tehran.

Iranian companies can export their products to the Eurasia market without any customs fees through transferring their production to Armenia, he said.

Referring to the establishing of the Iran-EAEU trade office in Armenia, he announced his country's readiness to invest $ 1 million in the project.

The Armenian official further invited ICCIMA head to attend the meeting of the chairmen of EAEU member states’ chambers of commerce to be held in Armenia in May 2020.

Referring to the good political relations between the two countries, Gholam Hossein Shafei, for his part, said that despite cultural proximity, the existence of numerous agreements and extensive political ties, the amount of exchanges and joint ventures between Iran and Armenia is limited.

By focusing on transport and transit, two sides can enhance relations and connect the Eurasian countries to the regional market, he added.

Also during a meeting on Monday between Masoud Khansari, the head of Tehran Chamber of Commerce, Industries, Mines and Agriculture (TCCIM), and Armenian Ambassador to Iran Artashes Toumanian, the two sides emphasized the need to preserve and expand trade relations between Iran and Armenia under a trade agreement between Iran and Eurasian Economic Union.

The trade agreement between Iran and EAEU officially came into force on October 27.