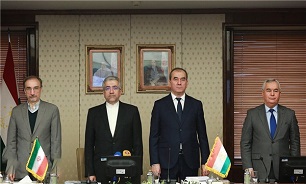 Ardakanian said that the Tajik minister will also attend the meeting of Board of Directors of water reservoir which is supposed to be held on December 5.

The expert panels are expected to address the issues arising from the process of implementation of the projects already signed by the two countries, Ardakanian noted.

In March, Tajikistan's Prime Minister Kokhir Rasulzoda, in a meeting with Iran's outgoing Ambassador Hojatullah Faqani, said that Dushanbe is determined to increase economic and commercial relations with Tehran, calling for increase in volume of trade between the two countries.

Earlier in mid-February, former Iranian Foreign Ministry Spokesman Bahram Qassemi said that Tehran is eager to further expand ties with Dushanbe as it considers its ties with Tajikistan as “familial”.