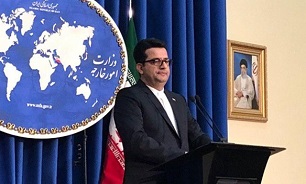 In a statement on Sunday, Mousavi expressed delight at the consultations among Lebanese political groups and their consensus on a new government, adding, “The formation of a government under such regional and international circumstances and considering the will of the Lebanese people is a stride forward and a positive step in resolving that country’s problems.”

“We hope that the new government could fulfill the demands of the Lebanese people who have won great glories in resistance and perseverance in the face of occupation, bullying and the hegemony,” he added.

“The Islamic Republic of Iran hopes that the new Lebanese government, which has been formed on the basis of the will of the people, could overcome all challenges in light of solidarity and strengthened national unity, and would carry out its plans for the inclusive progress and development of Lebanon and for creating security and welfare,” Mousavi said.

The Iranian spokesman voiced full support for the new Lebanese government, and reaffirmed the Islamic Republic of Iran’s readiness to further broaden relations between Tehran and Beirut.