TEHRAN(defapress) – Iran's First Vice-President Eshaq Jahangiri said in Zahedan, the capital city of Sistan-Baluchestan province in the southeast of the country on Tuesday that the Islamic Revolution is not a historically static event but rather a dynamic development and a brand new social movement initiated by the Iranian nation.
News ID: 80183 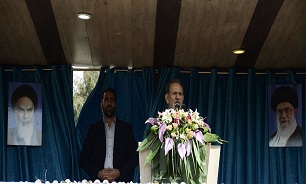 Jahangiri said that the Islamic Revolution gained victory not by relying on any with military power but thanks to people's support.

He added that the rallies of the anniversary of the Islamic Revolution sent an important message to the enemies and showed that the people are a good support for the Islamic System.

Jahangiri went on to say that the Islamic revolution fought against violence and is not dependent on a special group, sect, or social class; it is a many-sided revolution and people are seen in the center of it.