Putin Ready to Talk with Trump over New START’s Future

TEHRAN (defapress) – Russian President Vladimir Putin said he would be prepared to hold discussions with US President Donald Trump on the future of the Measures for the Further Reduction and Limitation of Strategic Offensive Arms (New START).
News ID: 80383 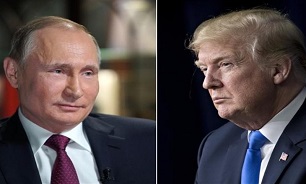 Refusing to prolong the agreement would be a mistake, he told TASS in an interview for the project entitled "20 Questions with Vladimir Putin".

"The New START treaty should be extended," he said.

Asked why the US was reluctant to agree to the treaty’s prolongation, Putin said that it might have been due to the way Washington interpreted security and ways of maintaining it.

Earlier, Putin invited the United States to prolong the agreement without any preconditions. There has been no reply from Washington to this day.

Moscow and Washington signed the Measures for the Further Reduction and Limitation of Strategic Offensive Arms in 2010. Under its terms, either country must reduce its strategic offensive arms in such a way that at the end of the seventh year following its entry into force and later on their overall amounts should not exceed 700 units of deployed inter-continental ballistic missiles (ICBMs), submarine-launched ballistic missiles (SLBMs) and heavy bombers, 1,550 warheads and 800 operational and non-operational missile launchers and strategic bombers.

The treaty was concluded for a period of ten years (until February 5, 2021). It can be replaced by a follow-up agreement before the deadline expires, or prolonged for no more than five years (until 2026) by mutual consent.

Moscow urges Washington to refrain from procrastinating on the treaty’s extension, because in its opinion it is the "gold standard" in the field of disarmament.