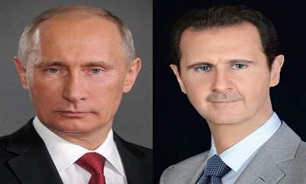 “Vladimir Putin updated Bashar al-Assad on the agreements reached during the Russian-Turkish summit held on March 5, stressing that their implementation will help stabilize the situation in the Idlib zone,” according to a statement by Kremlin.

“Bashar al-Assad praised the outcome of the talks between the leaders of Russia and Turkey, and expressed gratitude to the Russian President for his support in the fight against terrorist groups and for efforts aimed at ensuring the sovereignty and territorial integrity of Syria,” the statement added.

According to SANA, al-Assad praised the potential positive effects that these achievements could have on the Syrian people on various levels, including humanitarian, social, and economic levels if the Turkish side commits to them.

Russia and Turkey’s presidents, Vladimir Putin and Recep Tayyip Erdogan, had announced the truce that took force in Idlib at 00:01 a.m Friday, after three hours of face-to-face talks in Moscow on Thursday.

The deal was clinched amid a pressing need for pacification in Idlib, where Turkish violations had brought about an unwarranted flare-up of already high levels of deadly violence.

The escalation came when Turkish forces that are tasked with manning a number of observation posts in Syria supposedly contribute to de-escalation efforts, ventured outside the areas assigned to the posts, engaging with the Syrian military.

The province, though, began experiencing “calm” after the truce that allowed the Syrian government to secure two strategic routes running through it, reports by AFP and the so-called Syrian Observatory for Human Rights (SOHR), a UK-based monitor, showed.