TEHRAN (defapress) – The head of the US Office of Personnel Management (OPM) abruptly resigned Tuesday, leaving a void atop a sprawling agency that oversees the federal workforce.
News ID: 80542 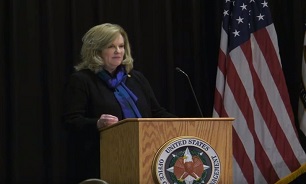 "OPM has received the resignation of OPM Director Dale Cabaniss and OPM Deputy Director Michael Rigas is Acting Director, Office of Personnel Management," an OPM spokesperson confirmed in a statement.

Cabaniss's departure was unexpected, according to sources familiar with the matter, and was believed to be related to internal conflicts.

She chafed at treatment by John McEntee, the 29-year-old head of the office, as well as Paul Dans, OPM’s White House liaison, Politico reported. McEntee rejoined the White House last month and has set about stocking the administration with officials loyal to US President Trump and his agenda.

Politico reported that the White House's decision to hire a third college senior to a sensitive post also contributed to the tensions that preceded Cabaniss's resignation.

"If these reports are true, then the Trump administration's mismanagement and political appointees have once again brought chaos to the federal workforce," Rep. Gerry Connolly (D-Va.), chairman of the House Government Operations subcommittee, said in a statement, The Hill reported.

"At the very moment we need OPM to operate smoothly and efficiently, including expanding telework for all eligible workers and contractors, we are instead faced with uncertainty that threatens to paralyze this agency," he added.

Cabaniss has led OPM since September, when she was confirmed in a 54-38 vote. She replaced Jeff Pon, who was ousted by Trump last October after just seven months on the job amid a dispute over the office's powers.

Cabaniss previously served under former President George W. Bush as chairwoman of the Federal Labor Relations Authority, which oversees collective bargaining and disputes between agencies and workers, and has worked on civil service issues for two decades on the Senate Appropriations and Homeland Security and Governmental Affairs committees.

Her exit comes at a precarious time for the federal government, which is attempting to find its footing in handling the coronavirus pandemic. OPM typically offers guidance on telework, benefits and other policies for federal government employees, many of whom have been urged to work from home when possible to limit transmission of the virus.

It also marks the latest reshuffling of key responsibilities within the government as Trump looks to purge the administration of career officials deemed insufficiently loyal.

"There are still some very bad, sick people in our government - people who do not love our Country (In fact, they hate our Country!)," Trump tweeted on March 9.