Spain, EU Should Counter US Attempt to Deprive Iran of IMF Loan 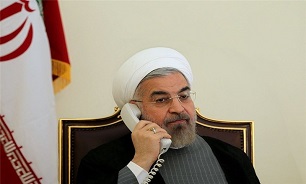 Speaking to Spanish Prime Minister Pedro Sanchez on the telephone on Tuesday, Rouhani sympathized with the people of Spain over the coronavirus fatalities, saying Tehran is ready to share its experiences in the fight against COVID-19 with the European country.

“In such a situation, the relations between countries should be based on human principles, and hostile policies must be confronted, but unfortunately we see that in these very difficult conditions, the United States continues to impose sanctions against Iran and even applies them on medicine,” he deplored.

Referring to Iran’s request for a loan from the IMF to deal with the coronavirus, Rouhani said, “The US has even opposed this loan, and the European Union and Spain are expected to adopt stances against this illegal act.”

The Iranian president also welcomed the Spanish premier’s proposal to resume talks and negotiations between the foreign ministers of the two countries to exchange views on important bilateral and international issues, including the implementation of the Joint Comprehensive Plan of Action (JCPOA), and stressed, “If the other countries fulfill all their obligations, we will return to our commitments as well.”

Emphasizing the need to implement the agreements between Iran and Spain, Rouhani expressed hope that the relations between the two countries would grow in all fields, his official website reported.

For his part, the Spanish prime minister expressed his sympathy with the Iranian people over the coronavirus deaths, saying, “In addition to concerns about the health of the people, we have deep concerns about the economic crisis that our country will face in the future.”

“We believe that US sanctions have had a profound effect on the Iranian economy and the health of the people, especially in this difficult time when you are facing coronavirus, and Spain and the European Union do not agree with these sanctions," Pedro Sanchez said.

He also voiced his support for the activation of the European Union's financial mechanism (INSTEX), saying, “We also have put joining the INSTEX on the agenda.”

Sanchez finally hailed the good relations between Iran and Spain, adding, “It is very important that we resume our trade relations in this situation.”