“We are dedicated to people, Revolution,” 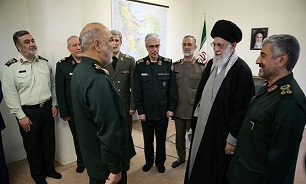 IRGC Chief Commander Salami thanked Leader of the Islamic Revolution Ayatollah Seyyed Ali Khamenei for his compassionate and kind message to IRGC commanders and officials as guardian of jurisprudent.

IRGC forces received the sublime order of the Leader, saying that “We Should Be Strong” and took effective steps in line with realizing the objectives of Second Step of the Islamic Revolution as well as expulsion of US terrorist forces from the region.