TEHRAN (defapress) – The presidents of Iran and Croatia called for the exchange of experiences and mutual cooperation in the fight against the novel coronavirus pandemic.
News ID: 80945 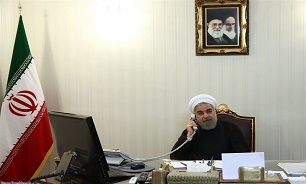 In a telephone conversation on Monday, Iranian President Hassan Rouhani and his Croatian counterpart Zoran Milanovic stressed the need for collaboration and mutual assistance among all countries in the current difficult conditions, calling for an end to the unilateral behavior of certain countries.

Referring to the unlawful, irrational and inhumane behavior of the United States in withdrawing from the 2015 nuclear deal and imposing sanctions and maximum pressure on the Iranian nation, Rouhani said the continuation of this behavior is anti-human, according to the Iranian government’s official website.

Tehran expects the European countries to deal with such behavior and take a tough stance, Rouhani added.

For his part, Milanovic called the mounting pressure of the US sanctions on Iran “inhumane” in such a difficult situation.

He further pointed to the good relations between Tehran and Zagreb, and stressed the importance of developing and deepening relations with Iran.

“As a country with a long history and a unique position in the region, Iran is of special importance for Croatia,” he added.

The Iranian and Croatian presidents also expressed solidarity with the people of the two countries in the difficult conditions of the battle with the coronavirus, and called for sharing experiences and capabilities to contain the disease.