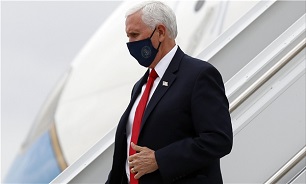 At a news conference alongside Texas and Donald Trump administration officials at the University of Texas Southwestern Medical Center in Dallas, Pence plainly called on Americans to "wear a mask, wherever it's indicated", NBC News reported.

"We encourage everyone to wear a mask in the affected areas," Pence said, adding, "Where you can't maintain social distancing, wearing a mask is just a good idea, especially young people."

Pence, who donned a mask earlier Sunday, visited Texas as it is experiencing a significant surge in cases and as the US set a single-day record for new coronavirus cases.

More than 125,000 people have died from the coronavirus in the US.

Pence had postponed some appearances that were planned in Arizona and Florida this week "out of an abundance of caution" because of virus spikes, a Trump campaign official stated. Pence is still expected to travel to those states to meet with local officials.

In an interview earlier on CBS' "Face the Nation", Pence noted the administration believes people should wear masks wherever it's called for by state or local authorities.

In an interview Sunday on NBC's "Meet the Press", Health and Human Services Secretary Alex Azar warned that "the window is closing" to act to curb the spread of the virus.

"We have to act, and people and individuals need to act responsibly," he said, adding, "We need to social distance. We need to wear face coverings if we are in settings where we cannot social distance, particularly in these hot zones."

President Donald Trump has generally refused to wear a mask in public settings, although he did wear one during a private tour of a Ford plant in Michigan weeks ago.

The Trump administration's waffling on face coverings has drawn criticism from both sides of the aisle.

"The president should be an example. You know, real men wear masks," House Speaker Nancy Pelosi, D-Calif., said Sunday on ABC's "This Week", adding, "Be an example to the country and wear the mask. ... It's not about protecting yourself. It's about protecting others and their families."

Washington Gov. Jay Inslee, a Democrat, stated on "Face the Nation", "Right now, we are in an urgent national mission, or should be, to mask up. And the fact is that Donald Trump is for masking up like George Wallace was for integration."

Speaking Thursday with KDKA-TV of Pittsburgh, former Vice President Joe Biden, the presumptive Democratic presidential nominee, said, "The one thing we do know, these masks make a gigantic difference."

"I would insist that everybody in public be wearing that mask," he added.