TEHRAN (defapress) – Iran’s Foreign Ministry spokesperson highlighted the country’s steady progress in the nuclear industry after reduction of its JCPOA commitments, saying Tehran does not face any operational restrictions on its nuclear program.
News ID: 81527 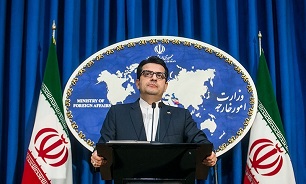 Speaking to reporters at a weekly press conference on Monday, Seyed Abbas Mousavi said the last key limitations under the Joint Comprehensive Plan of Action (JCPOA) on the number of uranium enrichment centrifuge machines were aborted after Iran implemented the fifth and final step in reducing its commitments to the 2015 nuclear deal in the wake of failure of the other parties to honor the agreement.

“Thereafter, Iran’s nuclear program does not face any operational restrictions, and the nuclear program moves forward by the Atomic Energy Organization (of Iran) according to the technical needs,” he underlined.

In the meanwhile, the spokesman added, Iran has continued to work in cooperation with the International Atomic Energy Agency (IAEA) in accordance with the Safeguards commitments and the voluntary implementation of the Additional Protocol.

Mousavi also pointed to the US government’s attempts to extend a UN arms embargo on Iran which is going to expire in October under the JCPOA, saying, “The international community is familiar with the US regime. The hegemonic US regime cannot press on with its illegal stances because of control over international institutions, as the age of rule of law is not over, contrary to (US President Donald) Trump’s view.”

Washington returned its bans in May 2018 after unilaterally and illegally leaving a 2015 nuclear agreement between Iran and major world powers.

In May 2019, a year after the US’ exit, Tehran began reducing its commitments under the deal on a stage-by-stage basis in response to Washington’s pullout and the ensuing European failure to make up for America’s absence.

Iranian President Hassan Rouhani said in June that Tehran would be prepared for talks with Washington as soon as the US returns to the JCPOA, complies with the UN regulations, apologizes to Iranians, and makes up for the damages it has caused to Iran.