Any US Crime to Expedite Demise of Israel, Iranian Speaker Warns

TEHRAN (defapress) – The Speaker of Iran’s Parliament cautioned the US that commitment of any crime against Iran will speed up the destruction of the Zionist regime, after American fighter jets harassed an Iranian passenger plane approaching the Beirut airport.
News ID: 81631 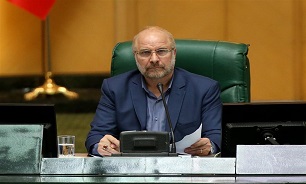 In a post on his Twitter account on Friday, Mohammad Baqer Qalibaf said he had been briefed on the details of the new “adventurist move by the American terrorists” after the harassment of the Iranian Beirut-bound passenger plane by two US fighter jets over the Syrian airspace Thursday night.

Qalibaf said the US is lying about the incident, noting the Iranian passenger plane’s pilot has announced that he received traffic collision avoidance system (TCAS) warnings twice as the two US fighter jets were flying too closely.

“The Americans made an attempt to prepare the ground for a possible mistake in order to achieve preplanned ominous objectives,” the Iranian speaker said.

He warned that any American crime will undoubtedly expedite the humiliating destruction of the arrogant powers in the region, particularly the Zionist regime.

A video posted on Friday by Iran’s IRIB news agency showed a jet from the window of a plane and blood on the face of a passenger – reportedly as a result from an injury sustained during the sudden altitude change.

The IRIB initially reported a single Israeli jet had come near the plane but later quoted the pilot as saying there were two jets which identified themselves as American.

The pilot of the passenger plane contacted the jet pilots to warn them about keeping a safe distance and the jet pilots identified themselves as American, the IRIB reported.

After refueling, it immediately took off and returned to Tehran’s Imam Khomeini Airport.