TEHRAN (defapress)- Secretary-General of the World Forum for Proximity of Islamic Schools of Thought Hamid Shahriari said the United Arab Emirates has committed an act of treason against the Holy Quran to normalize ties with the Zionist regime, adding that the fate of UAE leaders will be no better than that of Anwar Sadat.
News ID: 81802 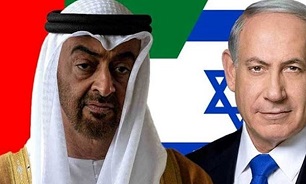 "We recommend the UAE leaders to return from this decision and not turn their backs on the Messenger of God,” Sahriari said on Sunday, adding that the UAE government has betrayed the Holy Quran and it should take care that it will end in the fate of Anwar Sadat.

He added that the criminal Zionist regime is killing and harassing with all its military, political, cultural, and economic power and publicly standing up to the Islamic world.

Trump on Thursday announced a deal brokered by his government between Israel and the UAE which he said would lead to full normalization of ties between the two.

Critics see the deal as the latest attempt by Trump to save his presidential campaign against the Democrat Joe Biden.

In relevant remarks on Sunday, Iranian Parliament Speaker Mohammad Baqer Qalibaf blasted the UAE for normalizing ties with Israel, calling it a blatant betrayal of the Islamic Ummah and the Palestinian cause.

“The agreement between the dynasty, ruling the UAE, and the Zionist regime is a clear betrayal of human values, the Islamic teachings, the Islamic Ummah and the Palestinian cause,” Qalibaf said, addressing an open session of the parliament in Tehran on Sunday.

He noted that those who seek friendship with Israel are considered by the Islamic Ummah as betrayers, criminals and accomplices in all measures adopted by the regime in the past, present and future, warning them that the Islamic Ummah and the Palestinian people’s struggle against the Zionist regime will never stop.

Qalibaf underlined that the fine line now drawn between the hypocrites and Muslims, as well as the enemies and friends of the Zionist regime will certainly further strengthen the resistance front's resolve to liberate the holy Quds.

Meanwhile, Iranian President Hassan Rouhani decried the recent normalization deal between the UAE and Israel, describing it as a gift to US President Donald Trump before elections.

“These days we have faced a neighboring country which has approached the enemy of the Islamic world and the region and the murderer of the Palestinian nation in a decision to get close to the Zionist regime,” Rouhani said, addressing a meeting of the national coronavirus campaign headquarters in Tehran on Saturday.

He added that the UAE rulers are wrongly thinking that their security and economy will improve through relations with Israel, noting that the measure is aimed at helping Trump win the November elections.

“(The UAE’s) measure is one hundred percent wrong and condemned,” Rouhani said.

He warned the regional states not to pave the way for Israel to have a foothold in the region.

Moreover, Chief of Staff of the Iranian Armed Forces Major General Mohammad Hossein Baqeri condemned the UAE’s compromise deal with Israel as an act of treason that will make Tehran start a fundamental revision of its ties with Abu Dhabi, and warned that the slightest threat to Iran's national security in the Persian Gulf will be blamed on the UAE.

“Unfortunately, the UAE has reached a deal to normalize ties with the child-killing Israeli regime,” Baqeri said on Sunday, warning, “We consider any tension in the region as a consequence of this move."

“Iran will not endure any incident in the Persian Gulf or any threat against its security," the general said.

“It is not acceptable for the UAE, as an Arab and Muslim country, to establish ties with a regime that has trespassed the first Muslim qibla, and has displaced, killed and imprisoned the Palestinian people,” he added.

Major General Baqeri emphasized, “Definitely, the Iranian nation’s approach towards this neighboring state [UAE] will change fundamentally, and the Islamic Republic’s Armed Forces will also deal with that country with different calculations.”

"The UAE had better reconsider this decision before it is too late, and leave the path that undermines its own security and the security of the region,” the top commander reiterated.