US in No Position to Demand 'Snapback' of UN Sanctions, China Says

TEHRAN (defapress) – Chinese Foreign Ministry Spokesman Zhao Lijian said the US is in no position to demand the return of all UN sanctions against Tehran through the so-called snapback provision in the 2015 nuclear deal.
News ID: 81837 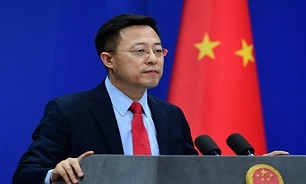 “Like we stressed many times, the US unilateral withdrawal from the JCPOA means renunciation of its rights as a participant of the deal, and it is in no position to demand enacting the snap-back mechanism,” Lijian said at a regular press conference on Friday.

The Iranian nuclear issue, the Chinese Foreign Ministry spokesman added, can be solved through “equal-footed dialogue and candid consultations” instead of imposing sanctions, mounting pressure or even making military threats.

Beijing is ready to cooperate with other parties to find a proper solution to the Iranian nuclear issue through political and diplomatic channels with the purpose of maintaining the JCPOA and authority of the Security Council, upholding international non-proliferation regime and safeguarding regional peace and stability, Zhao stated.

As part of an illegal underway push, the United States is trying to invoke the snapback mechanism in the JCPOA despite its withdrawal in May 2018 in violation of UN Security Council Resolution 2231 that endorses the nuclear deal.