TEHRAN (defapress) – First Deputy Speaker of Iranian Parliament Seyyed Amir Hossein Ghazizadeh Hashemi deplored any attempt to normalize ties with the Israeli regime, saying such a move will not contribute to the peace, stability to the region.
News ID: 81842 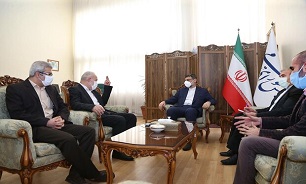 In a meeting with the representative of the Palestinian Islamic Jihad, Nasser Abu Sharif, in Tehran on Thursday, the Iranian deputy speaker said, “Normalization of ties with the Zionist regime will not bring peace and stability back to the region; on the contrary, it will increase the killing of Muslims by this cancerous tumor [Israeli regime].”

Referring to the covert efforts by the leaders of some Arab countries, Ghazizadeh said, “Some rulers of Islamic countries are in a hurry to normalize relations with the Israeli regime, and their behavior is a betrayal to the Islamic Ummah and the Palestinian cause.”

He noted that the approach of the Iranian people, government and parliament toward the issue of Palestine is not political, but it relates to the "religious teachings and balance”

“God's tradition is to support the oppressed, and the nation, parliament and government of the Islamic Republic of Iran have put such tradition as a guideline to back the Palestinian people.”

"Resistance and struggle against the occupation will continue and the Palestinian people will never be affected by treacherous acts."

At the end of the meeting, Abu Sharif expressed gratitude to the Leader of the Islamic Revolution Ayatollah Seyyed Ali Khamenei and the Iranian nation for their special support to the Palestinian people.