TEHRAN (defapress)- The Palestinian resistance movement Hamas strongly urges all Palestinian factions to sew up their differences in the face of measures targeting the Palestinian cause by the United States, Israel, and treacherous Arab regimes.
News ID: 81936 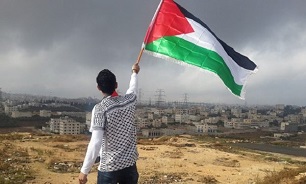 Ismail Haniyeh, the head of Hamas’ political bureau, made the remarks on Thursday in the Lebanese capital Beirut, where he had joined a plenary meeting of his fellow Palestinian leaders, presstv reported.

“We have come together today to say that the Palestinian nation will stay united whether at home or abroad,” he said.

The meeting was joined by Ziyad al-Nakhalah, leader of Islamic Jihad -- another Palestinian resistance group, which like Hamas is headquartered in the Israeli-blockaded Gaza Strip. Mahmoud Abbas, president of the Palestinian Authority, also addressed the gathering via video-link from the city of Ramallah in Israel-occupied West Bank.

“We are going through an unprecedented and dangerous stage” that harbors a “strategic threat for the Palestinian cause and the region,” Haniyeh said before going on to enumerate some of the sources of menace.

The Palestinian official cited the controversial US-devised “Deal of the Century” – a plot that US President Donald Trump unveiled in January, thus announcing Washington’s support for extraordinary violations by Tel Aviv against the Palestinians.

Haniyeh pointed to the favors that rub off on Israel under the deal, including the US’s support for Israel’s annexation of the parts of the West Bank, upon which the Israeli regime has been building settlements since occupying the territory in 1967.

He also referred to a fledgling trend of détente between some Arab regimes and Israel that saw the United Arab Emirates and the occupying regime announcing normalization of their relations on August 13.

All of the machinations, the Palestinian official said, were aimed at “consigning history and geography to oblivion.”

He, however, asserted that Palestinians’ answer to the schemes was all-inclusive resistance, adding that Israel would remain an enemy and Palestinians would not give up even one inch of their land.