TEHRAN (defapress)- The EU has no jurisdiction over maritime boundaries and should remain unbiased in Turkey’s dispute with Greece in the Mediterranean, Turkish Foreign Minister Mevlut Cavusoglu warned the European Parliament.
News ID: 82005 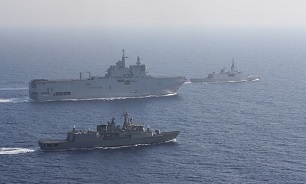 Ankara and Athens have competing claims to continental shelves in the East Mediterranean, believed to be rich in energy resources. Turkey says its shelf should be measured from the mainland, while Greece determines its claim based on the location of its many islands, some of which are situated close to Turkish shores.

The disagreement has seen the two neighbors and NATO members mobilizing their warships and planes, with Greece calling on Brussels to slap Turkey with “meaningful” sanctions over its aggressive behavior. EU leaders are expected to make a decision on sanctions during a summit on September 24-25, RT reported.

In a bid to avoid punitive measures, Cavusoglu addressed the European Parliament Foreign Affairs Committee via videoconference on Thursday.

The Turkish FM said that Ankara was prepared for “unconditional” talks with Greece and the EU on the issue. He insisted that the Mediterranean dispute remains unresolved because “Greece is not ready for dialogue”.

Cavusoglu urged the EU to be objective while examining the disagreement, despite the fact that Greece is a member of the political bloc.

Also on Thursday, Turkish and Greek military delegations met at the NATO headquarters in Brussels to discuss steps to prevent conflicts in the Mediterranean. The negotiations between the sides are set to continue in the coming days, according to Turkey’s Defense Ministry.

The current spike in tensions began a month ago after Ankara sent a research vessel into disputed waters near Cyprus.

The operation was ordered after Greece signed a drilling deal with Egypt. Ankara called it an infringement of its rights, despite signing a similar agreement with Libya’s Government of National Accord (GNA) last year.